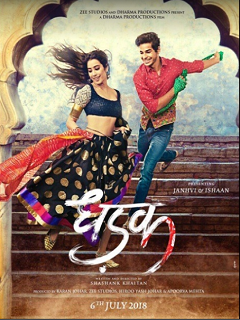 Udaipur. Madhu is a student who is secretly in love with Parthavi, a daughter of a wealthy man, Ratan, who is aiming to become the new mayor. Madhu and Parthavi become a couple, but their families are of a different caste and thus oppose their love. After winning the election, Ratan adopts an autocratic rule and imprisons Madhu. Parthavi frees Madhu and flees with him on a train to Mumbai, to a relative, who in turn sends them to Kolkata, to a Christian friend who runs a hostel. Living in a small hostel room, the couple is devastated, yet Madhu finds work in a restaurant and Parthavi in a call center. They get a baby. Gokul and Purshottam visit them. Roop, Parthavi's brother, shows up with his gang, allegedly to reconcile. Parthavi exits the house to buy some candy, but as she returns, Madhu and the baby are thrown from the balcony in front of her, which kills them.

A remake of the acclaimed film "Sairat", this Indian version of Romeo & Juliet is a deeply emotional, but also a deeply bitter commentary on the atavism called "honor killings", showing this archaic intrusion as a crime against humanity. Part of "Dhadak's" appeal lies in its remarkably honest, genuine way it treats the romance between Madhu and Parthavi, without any cynicism or ridicule, which is refreshingly sincere. The first, "optimistic" part of the film shows their gradual bond with a lot of humor and spirit: for instance, in order to charm Parthavi, Madhu films and uploads a video with his friends, Gokul and 4 ft tall Purshottam (a hilarious Shridshar Watsar), which he sends to Parthavi's cell phone, and then even sings the "How Much I Love You" song to her in front of the entire University—in English! After he gave her his phone number, Madhu spends the entire night on the balcony, waiting for her call, while his two friends sleep over for support, in a sympathetic scene of loyalty and friendship. When Parthavi finally calls in the morning, but he doesn't answer, so she calls him again, there is this comical exchange with Madhu: "Why didn't you pick up the phone the first time I called?" - "Sorry, I was too busy dancing from excitement."

Parthavi is also a surprisingly strong female character ("You can take your big mansion and throw it away in the lake!"). The second, dark part of the film arrives as a shock: instead of other fairy tale love stories where the couple escapes from the wrath of their parents, here Parthavi and Madhu travel to Kolkota, and have a terrible time adapting to a new lifestyle in poverty, where they do not speak the Bengali language. The realism is almost unbearable and in stark contrast to the idealistic opening act, while it also paints a good picture of other characters, such as their Christian tenant. While melodramatic at times, the story is lead by a steady hand by director Shashank Kaitan, who aims to engage the viewers with the message about unnecessary plight of a couple and the need for people to live their own life, without the intrusion of any dogma or fundamentalism. The ending is masterful: filmed in a single 3-minute long take, it arrives as swiftly as it turns into its exact opposite, in an emotional finale that will stay in the viewer's memory for a long time.