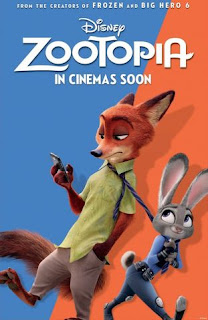 After a long and discouraging process, bunny Judy Hopps finally completes her training and becomes the first rabbit police officer. She goes to the police precinct in the city of Zootopia, but is assigned to only write parking tickets. At the same time, a mysterious case is plaguing the city: 14 predator animals are reported missing. Judy makes a bet with her Police Chief: if she can solve the case in 48 hours, she will become a full fledged police officer. If she fails, she resigns. Judy joins forces with a fox, Nick, a con artist. The two find an asylum where the 14 predators are held, who have all gone mad. The police then arrests Mayor Lionheart for holding the asylum. It turns out only predator animals develop these symptoms of madness, while herbivorous animals are exempt, sparking a rift of mistrust between the two in Zootopia. Judy however discovers that it was all just a ploy from Bellwether who became the new Mayor and who uses these scare tactics to stay in power. Bellwther is thus arrested.

Surprisingly thought-provocative and subversive, this CGI animated film rightfully seized the attention of both the critics and the audiences alike. It owes this to a story that works both as an entertaining 'buddy' comedy as well as a more complex, multi-layered commentary on multiculturalism and the clash between biological determinism and free will. Another plus point is the excellent heroine, bunny Judy (voiced by Ginnifer Goodwin), whose charm and enthusiasm engage the viewers. The only problem is the size of some animal characters: some are huge (such as elephants), some are small (such as mice), creating a disproportionate ratio at times. The jokes work and have inspiration: the opening has the two parents trying to "subtly" discourage their kid, Judy, from pursuing her dream as a police officer, with her dad even saying: "If you never try anything new, you never fail!" Judy, as a police officer, is presented remarkably super-ambitious: when assigned to be a parking inspector, she announces: "I'm going to write 200 parking tickets before noon!" There are numerous sight gags (the animal nudist camp) and satirical jabs at society (the highlight being the greatest spoof of bureaucracy on film, in the sequence where Judy is annoyed that sloth animals are assigned at the office, who work and talk, almost literally, in slow motion), but it also gives meaning to the characters in the finale, in a remarkable commentary on the trends of its time, the notion of politicians resorting to ultra-nationalism and inventing "enemies" from the "others" in order to stay in power based on fear, remarkably shaming and exposing Putin, Trump, Dodik and the others alike. Luckily, "Zootopia" refuses to dwell too long on politics, therefore avoiding to try to turn into liberal mouthpiece, and presents all these elements naturally, since they are imbibed in the story and the character interaction. "Zootopia" shows how, sometimes, "kids' movies" can be more fun than movies for grown ups.