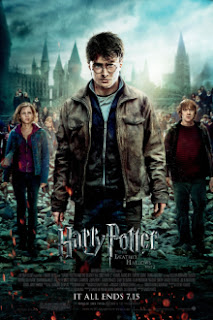 The final showdown has begun: Harry Potter, Hermione and Ron begin a quest to find the last of Lord Voldemort's Horcruxes in order to kill him. Using the help of  goblin Griphook, they enter Lestrange's vault. They find the Horcrux, a cup, and escape on a flying dragon. They return to the Hogwarts school and banish Severus from it. They then prepare with the students and Professors for Voldemort's attack. After Voldemort kills his associate, Severus, Harry finds out that Severus was actually a double agent: Severus only killed Dumbledore to gain Voldemort's loyalty. Many years ago, Voldemort tried to kill Harry when the latter was a baby, but failed, and a part of Voldemort's soul merged with Harry. Accepting that Voldemort can only die if he himself dies, Harry decides to allow Voldemort to zap him. However, Harry wakes up and, in a final duel, kills Voldemort. 19 years later, Harry, Ron and Hermione escort their kids on a train to Hogwarts.

The 8th and final instalment of the "Harry Potter" franchise, "Deathly Hallows 2" is a proportionally worthy conclusion to the film series. Since it signals the maturing and growing up of the teenage protagonists, it is appropriately one of the darkest contributions in the series, almost without any humor, with a very raw, bleak finale about self-sacrifice for a higher cause and friendship. The characters were not given much room to shine, though, since Ron and Hermione almost act like extras for long parts of the storyline, whereas other side characters almost disappear after a minute (John Hurt and Warwick Davis, for instance). On the other hand, Ralph Fiennes and Alan Rickman are excellent, giving more charisma to their characters than it was actually in the script. While competent, the story seems rather routine and predictable (the good guys beats the bad guy at the end) and did not offer that many surprises, except for a twist involving Severus, yet it at least reduced the useless subplots to the minimum, avoiding 'fillers' from the previous films in order to advance the plot and bring it finally to a point. The dry, schematic ending bothers, since it seems strangely rushed, and lacks any sort of a cathartic charge that was intended. Nonetheless, director Peter Yates crafts a suspenseful, dynamic and energetic film, bringing the final chapter of the saga to a rather satisfying conclusion.