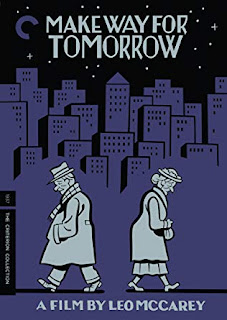 During dinner, Barkley and Lucy Cooper, a retired couple in their 60s, announce that they lost their home to the bank due to too high financial costs. Their five grown ups children are in a quandary: none of them is willing to accommodate their parents, since each of them is raising their own family. Lucy is sent to live in a small room in the New York apartment of her son George, while Barkley goes to the rural area, in the home of daughter Cora. Lucy seems to be a burden to George's wife Anita and teenage daughter Rhoda. Barkley tries to find a job to regain an own home, but catches a cold, which Cora uses as an excuse to try to send him to his other child, living in warm California. Before departing for California, Barkley spends a few hours with Lucy together, who is being sent to a retirement home.

Legend has it that when he received the best director Oscar for "The Awful Truth", Leo McCarey allegedly said: "Thanks, but you gave it to me for the wrong picture", alluding to the ignored drama "Make Way for Tomorrow", which he directed that same year. While "Duck Soup" is McCarey's best achievement, "Make Way" is also a very interesting film, an unassuming, bitter and depressive drama about the lack of any perspective during old age, which observes how a retired couple is faced to accept that their lives became redundant to the society. Elderly care is not quite a "high concept" for a film, yet it courageously dares to tackle the unpleasant topic through a low key, simple narrative built on small nuances and subtle observations about human relations. In one of the most memorable sequences, Anita asks her 17-year old daughter Rhoda to take grandmother Lucy out of the apartment, since their friends want to play bridge in peace. Rhoda takes Lucy to a cinema, but then exits the theatre to go out on a date. Two hours later, Rhoda hurriedly returns to the cinema and asks a woman to give her a summary of the film. Rhoda then finds Lucy waiting for her outside, feigning she liked the movie, until grandmother tells Rhoda she saw her exiting her boyfriend's car. Another sad moment has one of Lucy's daughters agreeing to take Lucy at her home, but her husband is against the idea: "When we married, I didn't ask my mother to live with us, did I?" It is a slow burning tragedy watching Lucy and Barkley getting tossed left and right, as if they are a burden, and the movie itself seems to not know what the solution might be. However, McCarey directed the movie in a too monotone way at times, with a few 'rough' edges (why was it necessary for Lucy and Barkley to be separated? Wouldn't it have been far more constructive to have them stay together at a one of their kid's home?) and lack of inspiration, especially in the rather pointless last 20 minutes, though the main theme is so true and genuine one can forgive its flaws.