Letter from an Unknown Woman 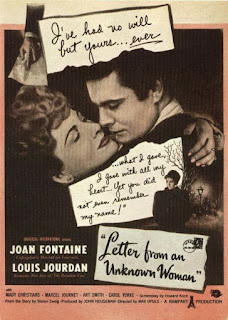 Vienna, 1 9 0 0. Stefan receives a letter from a seemingly unknown woman who tells her story: Lisa is a teenage girl who moves with her family to a large apartment block. She falls in love with one of the tenants there, the "Casanova" piano player Stefan, but is too shy to tell him anything. Her mother wants to move to Linz. A few years later, Lisa returns to Vienna and works as a dress model, and stumbles upon Stefan on the street. He kisses her and they spend some time together as a couple. However, Stefan goes to a concert in Milan, but forgets about Lisa and never returns. Lisa gives birth to his child, a boy, and marries officer Johann. Years later, she again encounters an aging Stefan and he invites her to his home, but she is disappointed that he doesn't remember her at all. Her son dies from typhus, and she succumbs herself. Stefan reads the letter and realizes his mistake.

Max Ophuls returned to his European surroundings with "Letter from an Unknown Woman", a tragic love story that also gives a remarkably detailed portrait of Vienna during the beginning of the 20th century (several details are included, such as a fake train "drive" where the bicycles driver actually just runs a long sheet of panoramas of various countries in front of the window for the passengers; vendors selling sweets on the street; an employee preparing newspapers inside a cafe for the morning...). Make no mistake about it: it is kitsch, but an elevated kitsch. Deprived of any humor, stand-out dialogues, a more complex story or an inventive style, "Letter" is a simple story that embraces its concept with surprising honesty and seriousness, though more creativity would have been welcomed. The most was achieved from its two main actors, excellent Joan Fontaine and Louis Jordan, who play the doomed love couple, while Ophuls uses mostly long, elegant camera drives to encompass the set designs around them, also displaying several of his bitter themes about life, from fatalism, end of idealism, missed chances up to the realization that people should cherish what they have before it is gone. Nonetheless, "Letter" is still a tiny bit overrated: it is contrived by shoehorning several ploys to wreck the relationship of the two (the low point is when Stefan kisses Lisa and tells her he is only leaving for two weeks to Milan for a concert, but never comes back!), it is sometimes melodramatic and one-dimensional, whereas one cannot shake away the feeling that the whole story is doomed because it shows an underdeveloped couple: a romance between a man who forgets everything and a woman who takes 20 years to say something.