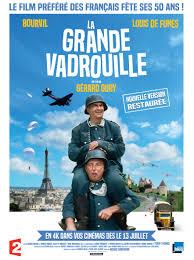 Paris during World War II. German soldiers shoot a British war plane over the city, and thus the three British pilots—Reginald, Peter, MacIntosh—parachut and disperse over the city. One lands on a building of a painter, Augustin, who flees with him inside the apartment of Juliette, a puppet player, to hide him. Another British soldier hides inside the theatre of conductor Stanislav. Unwillingly, after being persecuted by Nazi soldiers, Augustin and Stanislav join forces and find the third British soldier. The six of them thus decide to flee towards South, to the free zone, where the Allies will pick up the three British pilots. However, because they missed the train, Peter took off by himself, and was caught by German soldiers. Stanislav and the others took a postal van to south. Dressing up as German soldiers, they set up a fire inside a German base and use the chaos to free Peter. They thus manage to reach the free zone.

The highest grossing French film of its time, a one which set a record with over 17,000,000 tickets sold at the box office, "The Great Runaround" is set in Paris during World War II, but director Gerard Oury refuses to treat it as such, and thus—in spite of its dark-serious setting—it is simply a fun, optimistic and cheerful 'light' comedy. The rescue mission of the three British pilots turns into a comic road movie, but it shows its overstretched running time since the repeated motive of the protagonist just running away, and running away, and running away from the German soldiers does get repetitive in the last third, which has too much 'empty walk' and too little inspiration for something more versatile. Nonetheless, comedian legend Louis de Funes again has a field day as conductor Stanislav, delivering a few delicious gags. The highlight is the boarding house sequence: during the night, Stanislav accidentally enters the wrong bedroom and lies on the bed, not realizing that the person covered with a blanket and sleeping next to him is not his friend, Augustin, but actually his enemy—a German officer, who is snoring. Oblivious, Stanislav thus remembers that Augustin told him to "whistle" if he starts snoring, so Stanislav whistles to cause the snoring to stop. But since it doesn't work, Stanislav uses all kind of outrageous squeaks, peeps and "duck sounds" to make him stop snoring, in a moment of hilarious insanity. Nobody else in the movie, not even comedian Bourvil, is close to reaching even a tenth of de Funes' comic scale here. There are also other amusing scenes (a British soldier falling with a parachute over a Zoo, trying to avoid to land in the lion's cage; a miniature statue with the Hitler salute on a cake...), but the last third seems too mechanical and routine to truly ignite into something more ambitious.