The Ghost of Slumber Mountain 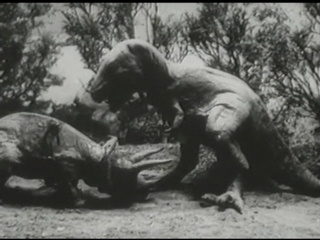 One summer day, an uncle decides to tell a story to two bored kids. In the story, he tells how he went on a picnic to Slumber Mountain, together with a friend and a dog. They were near a secluded cabin in the woods that belonged to a man who died. One night, while sleeping in the wild, he heard a voice and followed it. The uncle met the ghost of the cabin who gave him a telescope to watch dinosaurs from the hill. When a T. rex started to chase him, the uncle woke up from the dream.

The 2nd earliest example of stop-motion effects used to conjure up living dinosaurs in cinema, next only to Willis O'Brien's own short film "The Dinosaur and the Missing Link" (Griffith's "Brute Force" contains only a 20 seconds scene of an unmovable dinosaur puppet), 20 minute silent adventure "The Ghost of Slumber Mountain" is more of an exercise and an excuse to have preistoric animals in a vague story in order for the visionary to train his visual effects skills than a fully developed film, though it was eclipsed by his own work seven years later with "The Lost World" that became a box office hit and a sensation over night. This film daringly traverses from a story-within-a-story, something yet unexplored in the early cinema, framed as a tale told by an uncle to two kids, the old fashioned presentation of camping in the woods has a certain raw charm, yet the ghost subplot is uneven, while the obvious highlight is the 2 minute sequence of a T. rex and a Triceratops fighting at the end, that overshadows everything previously seen in the film. Throughout the history of cinema, here and there human fascination with dinosaurs was mirrored, yet only a handful of them really advanced into truly great achievements, like "Jurassic Park", "The Land Before Time", "Fantasia" or "King Kong".