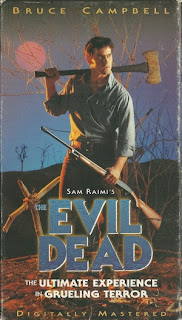 Two guys - Ash and Scotty - and three girls - Cheryl, Shelly and Linda - drive with their car to a secluded old cabin in the woods. However, that night they find a tape recorder and play it, thereby inadvertently summoning the demons through the words of a researcher who explored the Book of the Dead. Cheryl goes outside and is assaulted by trees. One by one, the five of them are possessed by demons, except Ash who fights them and tries to survive until morning. Cheryl and Scotty, possessed, attack Ash, but he manages to destroy them by throwing the Book of the Dead into the fire.

While numerous other independently produced horror B-movies were lost in the sands of time, Sam Raimi's "The Evil Dead" managed to "survive" and acquire cult status, though more thanks to the superior sequel "The Evil Dead II" which advanced into such an institution that it even retroactively pulled the 1st film with it. Take away the (thorough) style and humor from "The Evil Dead II", and you have "The Evil Dead". It is a good piece of horror that manages to conjure up a fantastic eerie mood, all until the scares truly start, which appeal to the cheaper means here and there and seem more like a standard horror. Still, it has two great examples of suspense that not even Hitchcock would be ashamed off: the first one where the five heroes have dinner but are interrupted when the door of the basement suddenly opens all by itself, while Scotty goes downstairs to check it out but does not come back, and the second one where Ash buries the corpse, then wants to reach for a necklace on the floor but the hand of the corpse emerges from earth and grabs him. The rest in also scary, but not particularly sophisticated, nor as inventive as the comical part 2, nor that clever. Likewise, the grotesque make-up does tend to become an overkill towards the end, and some scenes are slightly sloppy (would a woman in a bathrobe really go out into the woods - at night - all by herself - to check out a strange noise? A force breaks the window next door, Scotty goes to check it out - while Ash just remains sitting on the couch as if he does not care?), though they do not take a too huge toll on the film as a whole.