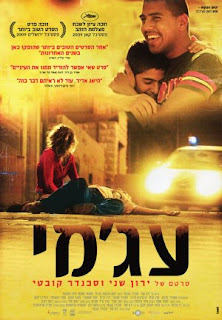 Several interwoven stories in Ajami, an Arab neighborhood in Jaffa. A Bedouin thug demands a racket from a cafe, but the owner shoots him. However, now the Beduin family wants to take revenge on the whole family of the owner, including the innocent nephew Omar. Thanks to the influential christian Abu Lias, a truce is declared and a wise old man is sent as a mediator. He decides that Omar's family must pay 35,000 dinars to the Bedouins... Teenager Malek works for Abu Lias in a restaurant. In order to finance a treatment for his sick mother, he mistakenly takes sugar from Binj, thinking it is a drug, and gets in trouble for trying to sell it to a drug dealer... Dando is informed that the body of his dead brother has been found in the Palestinian territories... Abu Lias' son Binj has to hide drugs for Sis in his apartment. Malek sees the drug, but leaves before Binj flushes it down the toilet and replaces it with sugar... Abu Lias wants to separate his daughter Hadir from Muslim Omar, so he sets up a trap for him during a drug deal.

The third Israeli movie in a row nominated for an Oscar for best foreign language film, "Ajami" has been riding on the wave of anthology films which were popular at that time, especially after the works by director Inarritu and the acclaimed "Crash", here presenting five interwoven stories which all get connected towards the end. The directing duo Copti-Shani has a good sense for the realistic, unglamorous portrait of their city, as well as a fine rhythm of working with non-professional actors, which gives it a seal of authenticity, yet the 'seperate, but interwoven stories' concept has already been done so many times that something more unique or new should have been expected from them. The five stories are good, yet rarely original or fresh, and only two of them advanced into truly fleshed out examples of fine narrative: the first one (involving a great little sequence of a wise old man who is sent to be a mediator between two families in a feud, so he sets up a high price at first, but then starts reducing it for a third because the family member has been shot, and then reducing it again for a third "for the prophet Muhammad") and the last story where a christian does not want his daughter to be with a Muslim. "Ajami" has a punchline towards the end, but one must wait a long two hours to get there. Overall, it is an ambitious, honest and unassuming example of independent film making.