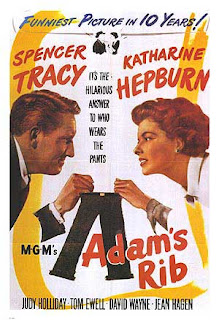 Doris found her husband in arms with another woman so, in a moment of jealousy, she shot him with a pistol. But her husband survived and sued her for attempted murder - while the lawyer Adam unwillingly got the case and isn't pleased about it since he read about it in the newspaper. When she heard that, Adam's emancipated wife Amanda, also a lawyer, immediately decided to defend Doris on the trial. As the trial becomes more and more vicious, it starts moving from the court to Adam and Amanda's private life, who even start thinking about a divorce. The jury pronounces Doris innocent while Adam and Amanda make up.

"Adam's Rib" is an amusing and intelligent comedy that speaks about the issue of the battle between men and women and the everlasting tendency of women for a equal role in the society, while the actress Judy Holiday was nominated for an Golden Globe and the screenplay for an Oscar. The ambitious (and highly allegoric) story about the fight between two married lawyers who defend their male/female opposite clients in order to mirror their perspectives was used for a quality portray of male-female relationships, but the whole isn't as funny or stimulative as it could have been, coming across as slightly forced, and it also made the mistake to too aggressively escalate the antagonism between the genders. At the same time the movie can commend with a few first-rate dialogues ("Lawyers shouldn't fall in love among themselves. That's incest. Then they get idiotic children and even more lawyers") and situations of absurd (during the trial a strong woman from the circus lifts Adam in the air by holding his legs, what even shows up as a caricature in a newspaper), thus creating solid messages and points that are in the function of the story, and the actors are excellent.