Where Is the Friend's Home? 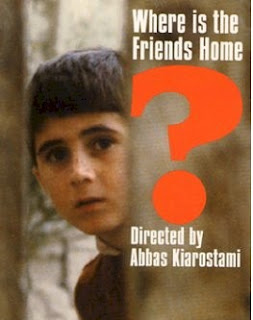 The teacher is late for 5 minutes in his class inside a elementary school. He checks the homework of every child pupil and eventually notices that one of them, Nematzadeh, again wrote his assignment on a piece of paper instead in his notebook. Since he didn't obey him before, the teacher gives him one final warning: either he writes his next homework in his notebook or he will be expelled from school. Outside the school, Nematzadeh fell and his colleague Ahmed helped him up, accidentally taking his notebook. Back at home, Ahmed realized Nematzedah's notebook is at him, so he decided to find his home and return it to him, knowing it will be his blame if he gets expelled from school. He doesn't manage to find his home, but he writes the homework for him and brings his notebook back in school the next day.

"Where Is the Friend's Home?" is another minimalistic film from Abbas Kiarostami that once again shows that every event in life can be interesting and appropriate for a film, no matter how small or insignificant it seems. In this case, a 8-year old boy goes to find the home of his colleague to return his notebook, which isn't something western moviegoers would consider a high concept. Quiet poetry, humanity, long shots, simple events and a plot, fascinating rural landscapes and realism are all the ingredients that can be found even in this film from Kiarostami, but also all of his flaws, like the overstretched feeling and at parts boring moments. Also, some of the moments seem slightly forced, like the constant tendency of actors to repeat their lines four or five times: for instance, a man asks the boy Ahmed to give him a piece of paper from his notebook, but the boy refuses since it's not his. The man asks him again for a piece of paper, and the boy refuses again. So the man asks him again for a piece of paper from his notebook, and the boy refuses again. Sometime later, the boy asks him if he is the father of Nematzadeh, but the man doesn't notice him and keeps talking with his customers whom he wants to sell a door. The boy asks him again and again, and so a couple of times. Still, at its core, this is a story about loyalty and moral values and even the simplest scenes, like the one where the teacher is examining the homework of the pupils in the class seem intriguing and authentic, while the charming end underlies the message that there are more than one way to solve a problem. Like most of introverted films, this one also relaxes the soul and demands enormous patience, but it doesn't pay out to the fullest.