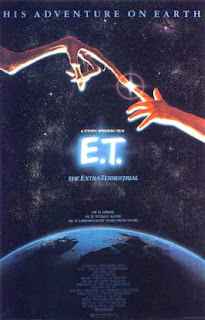 California. A UFO leaves the forest after a group of people arrive, leaving one alien stranded on Earth. The alien hides at home of a boy, Elliott, who becomes his friend. Elliott's sister Gertie and older brother Michael are frightened at first, but decide to keep it a secret from their mother. Elliott and E. T. gain a psychic connection, but government agents suddenly invade their home. E. T. becomes sick and dies, but resurrects while Elliott and Michael manage to bring him back to the forest, where he is picked up by his people in a spaceship.

Winner of several awards, the 4th highest grossing film of the 20th century by selling 142,000,000 tickets at the American box office, "E. T." is a slightly overrated, stiff and inert, but still good achievement that managed to be a family film that's equally as interesting for grown ups, full of purity. "E. T." seems like a sequel of Spielberg's own "Close Encounters of the Third Kind" and a paraphrase of the embodiment of an imaginary children's friend, a touching story about friendship without limits - curiously enough, if Elliott's first and last letter would have been added, it would create the initials ET - and children's desire to find some strong shoulder during a time of crisis, in this case when their parents divorced.

The dialogues and scenes are actually pretty clever and elevate the quality of the tame story - the "Ur-anus" line is there, and in one scene Elliott unwittingly jokingly says: "How do you explain school to a higher intelligence?" When E. T. gets to know Elliott more, the boy shows him his "Star Wars" figures. They also gain a psychic connection: when E. T. gets drunk by drinking beer at home, Elliott also suddenly starts acting like drunk in school, and when E. T. watches a movie where a man and a woman kiss, Elliott in the same manner kisses a girl. Somewhere near the beginning, the mother is leaning forward while a kid mischievously points with his finger as if he is going to touch her butt. The film is full of realistic details and everyday observations, but the most interesting thing in it is the hidden religious subtext: from the film's poster, which paraphrases Michelangelo's "Creation of Adam", up to the fact that E. T. can heal people and even dies and resurrects at the end of the film, but the Jesus parallels still seem a little overstretched. However, compared to the highly intelligent aliens in "Close Encounters", which showed up only near the end, E.T. is, perplexingly, only an inarticulate pet, without much insight or wisdom expected for such a technologically superior being. Some critics often critised Spielberg for being "too sentimental", but emotions with measure were never a bad thing in movies: "E. T." is a nice, gentle, simple fairy tale about friendship and innocence that's still relevant today.