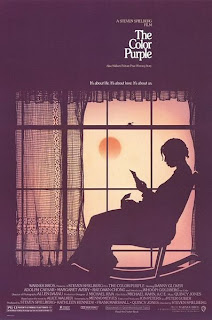 USA from 1909 to 1949: young African America girl Celie was raped by her father and gave birth to two children, who were taken away from her. She loves her sister Nettie very much, but then she gets forced to marry a brutal farmer called "Mister" and take care of his children. A jazz singer girl, Shug, becomes friends with Celie, while her other friend Sofia marries Mister's son Harpo and ends up for 8 years in jail because of a rude remark to the mayor's wife. After she found out he has been hiding her letters from Nettie, Celie leaves Mister and opens a haberdashery, uniting together with her children.

Gentle epic melodrama "The Color Purple" has a lot of wonderful emphasized emotions and thoughtful demanding moments, but it's still a step away from being totally right. Although many complained that Spielberg, a Jewish millionaire, didn't have the appropriate background for a portray of (self)repressed African Americans in the South, he did a very good job and consistently proved to find orientation even in themes out of his league. Although the story is too long, the biggest complaint can be attributed to it's mild, conventional realization of the intriguing script that cherishes it's figures and addresses such issues as incest and forced marriage. Academy nominated the film for 11 Oscars, including best picture and best actresses (very good, understated debuts from Whoopi Goldberg and Oprah Winfrey), but it didn't win none, while Goldberg managed to win a Golden Globe. It's a film that gains it's sympathies from the suffering of the characters, but doesn't exploit them, while Spielberg cleverly placed purple subtitles in the opening credits, and didn't portray Celia's abusive husband called "Mister" as a one dimensional character, but even gave him some positive features.