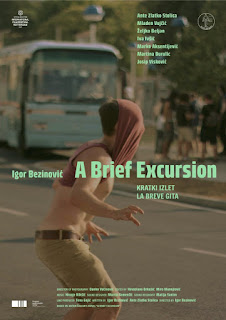 Stola is a guy who spends his summer in a tourist camp in Istria, where he meets various people who party and drink all the time. One day, their bus stops in the middle of a forest and Roko decides to lead a group of seven people, which includes Stola, to a long journey on foot to visit some frescos in a secluded monastery. On their long walk through the nature, they encounter three women in an empty village; bulls; people in costumes; they drink in a house made of stone; they take a swim in a river... Little by little, people leave the group, until only Roko and Stola arrive at the monastery. They enter the catacombs, and only Stola exits out on the street in an unknown town.

This unusual and bizarre surreal road movie is only suitable for a selected art-house audience, since its overbearing metaphors and a refusal to tell any coherent narrative will strain the patience of some who will try to understand it. Director Igor Bezinovic copes the best with a few aesthetically pleasant panorama shots of the nature, capturing some sort of contrast between the Mediterranean wilderness and the seven people from civilization who aimlessly wonder for miles in search for a monastery, yet he is unable to extended the movie into anything more than a few neat frames and pictures, since the lack of any point turns "A Brief Excursion" into a bland and tiresome experimental film that drags. As some people start leaving the group, one by one, the viewers will inevitably wonder if some actors decided to simply quit the film. The concept of a group that follows a man, Roko, who leads them nowhere through the forest, is a symbol for something, yet it isn't quite sure for what. At best, it may be seen as an analogy for people who blindly follow empty authority figures, even though it makes no sense to do so, and some of that has merit in the overall picture. However, the movie needed more ingenuity and color to work: someone like D. Lynch could have made this work by adding more surreal highlights, yet here this is reduced only to the group encountering a herd of bulls on the meadow or some men dressed in strange costumes. Without these ingredients, it is not quite clear why the viewers should care or be invested into the film when there is not much to enjoy in it, anyway.