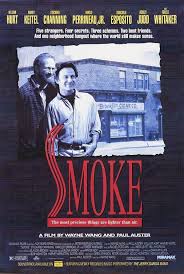 Auggie is the owner of a small tobacco shop store and friends with a writer, Paul Benjamin, whose wife has been killed a few years ago by a criminal. Paul is saved by an African-American teenager, Thomas, from a truck on the street, so Paul offers him to stay at his apartment. However, Paul finds out that Thomas allegedly witnessed a bank robbery and took a package that was dropped, which contained 5,814$. The criminal "Creeper" is thus searching for him. Thomas finds a job at Auggie's place, but the water from the sink ruins the store's cigars. In order to make it up to him, Thomas gives 5,000$ to Auggie, who in turn gives the money to his ex-girlfriend, Ruby, who claims that he is the father of her 18-year old daughter. Thomas meets his long lost father, Cyrus Cole, an auto mechanic, and they make up. Finally, Auggie tells Paul a Christmas story.

One of the surprise early hits by independent production company Miramax, "Smoke" is a relaxed and casual 'slice-of-life' anthology that follows the lives of ordinary people in a Brooklyn neighborhood. It does not aim to demonstrate some high concept or a higher movie knowledge, which might set some viewers off, yet its unassuming characters and situations offer just enough to keep the attention of the public. Some episodes work better, some less, but all are delivered with the same enthusiasm by excellent actors Harvey Keitel and William Hurt, as Auggie and Paul, respectively. Writer Paul Auster could have delivered better dialogues with a point, though. One of the more interesting features is when Paul and Thomas are talking about an alleged anecdote, a one where Mikhail Bakhtin used the pages of his own manuscript to roll them into cigarettes during the siege of Leningrad, debating if a writer would ever destroy his own work just for a smoke, or when Auggie is making a photo of a street crossing each morning at the exact same time for 4,000 days, from the 70s, in order to capture a giant time lapse of the change of the people in his album. A lesser subplot involves a typical, cliche family reunion of Thomas and his long lost father, Cyrus: despite a great performance by Forest Whitaker, who plays him with a hook, the segment seems routine and was already seen a thousand time in various previous melodramas. It is all circled out by a 10-minute sequence in which Auggie tells Paul a rather touching Christmas story, a one where he chased after a shop lifter who dropped his wallet, and then went to the latter adress just to meet the robber's frail grandmother and spend the holiday with her. "Smoke" is like hanging out with good friends: outsiders may find the anecdotes boring, but those who are willing to get involved may discover that they actually have a nice time.