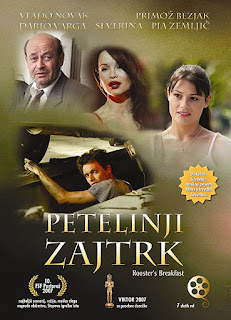 David "Đuro" is an auto mechanic who, after getting fired, finds a new place to work in Gornja Radgonja, at Gajaš's auto repair shop. Gajaš is often ridiculed by the local pimp, Lepec, who constantly brings his smashed cars for repair, but rarely pays his debts. Đuro starts an affair with Bronja, Lepec's wife. Lepec tries to erase his debts by giving Gajaš a prostitute for a night stand. Gajaš is fascinated by the Croatian singer Severina and is thrilled when Lepec brings him a ticket for her concert. However, one night Lepec brings Gajaš "Severina" who has sex with him. The next morning, Gajaš finds out that it was just a prostitute who looked like Severina and that Lepec made a prank at his expense. Gajaš then shoots and kills Lepec, enabling Đuro to be with Bornja.

"Rooster's Breakfast" turned into a surprise phenomenon when it sold 126,275 tickets at the Slovenian box office, advancing into the highest grossing Slovenian film of its time. However, as with many other huge hits from foreign countries, "Breakfast" is another example of a "misplaced hype", and many viewers will probably ask themselves: "What was the big deal, anyway?" The story revolving around an auto mechanic having an affair with a married woman is nothing special and with a running time of over 120 minutes, it is decisively overlong: the first hour seems almost like a soap opera at times, with bland, empty, uninteresting vignettes ranging from a celebration up to some guy playing Severina's songs on a synthesizer, yet the second half somehow "twitches" itself from this "sleep mode" when it adds some interesting moments, most noticeably when Gajaš and his friends visit Lepec's brothel or when Đuro and Bronja have a rather well crafted sex sequence in bed. Numerous plot points are utterly pointless and lead nowhere: randomly, out of nowhere, Gajaš and his friends hear that their pal, the dentist, bit off the clitoris of a woman and was exposed to be a pedophile, which even makes headlines in the newspaper. When the dentist later on arrives with his car at the auto mechanic shop, this leads to the best joke when Gajaš shouts at him: "Don't you dare to step out of the door! Get out! You embarrassed the whole town!" Unfortunately, this subplot is entirely irrelevant to the narrative. Gajaš is played energetically by the great Vlado Novak (in one sequence, he remembers how he saw "Bonnie & Clyde" in the cinema, with "that lady, Fayneway"), who almost steals the show from the protagonist Đuro and his underdeveloped relationship with Bronja. And Severina has an effective cameo near the end. Still, these small crumbs of pleasure cannot bring life to this film, which never quite comes together.