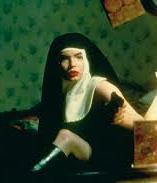 Thana is a mute girl who works in a fashion store in New York. While returning home from work, she is raped by a criminal. Back in her apartment, another criminal breaks into her room and rapes her, as well, but in an act of rage she kills him with an iron. She hacks up the corpse and throws its parts across the city. When a guy wants to return her bag, she shoots and kills him with a pistol. This triggers her campaign against men, killing even innocent ones: pedestrians, model photographers, rich Arabs... During a costume party, Thana disguises herself as a nun and starts randomly killing men. She is stopped and killed by a woman.

With a running time of only 75 minutes, thriller "Ms. 45" (sometimes also known as "Angel of Vengeance") managed to exploit its modest, independent budget to the fullest by creating an excellent mood and an untypical story — a sort of inversion of trashy thrillers about a revenge killer — thereby helping to promote Abel Ferrara into a highly noticed director and screenwriter. There are flaws which are unavoidable for such a controversial, polarizing topic with unabashed audacity, bordering on the exploitation genre, yet Zoe Tamerlis Lund gives a great performance as the mute (anti)heroine Thana (her name, a pun of the mythological figure "Thanatos" which means "death", already foreshadowing her journey), even though she does not speak a single word throughout the film. Her muteness is a symbol for the helplessness of women who were rape victims in the first half of the story, whereas in the second half it transforms into another kind of symbol, a one of a mad killer who is denuded from any kind of personality, since the leitmotiv of the film is violence that dumbs down and inhibits the people's mind, bravely showing how Thana undergoes a journey from a victim to a perpetrator in her irrational generalization of hate for men. One of the best sequences is the one where Thana aims her pistol at a depressive man and pulls the trigger — but nothing happens. However, he notices her move, takes her gun away — and then kills himself. Ironically, in the end, Thana is stopped precisely by a woman, which displays Ferrara's clever playing around with feminism and cliches.