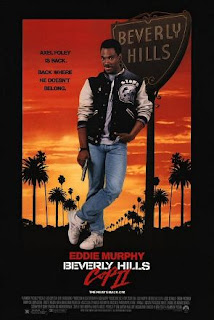 Just as Detroit Police Detective Axel Foley thought everything was over, the circumstances force him to go back to Beverly Hills: his friend, Police Captain Bogomil was shot and wounded while he was exploring the explosive "Alphabet Crimes", involving several robberies, and thus Axel decides to take over the investigation, together with his old friends Billy and Sargent Taggert. They discover that the mastermind behind these crimes is Maxwell, who tries to frame everything on an associate he killed in order to freely escape and sell smuggled weapons to Central America. However, in a shootout around his oil field, Axel, Billy and Taggert stop his gang.

Three years after the 1st film advanced into the 7th highest grossing movie of the 80s, the producers delivered one of the most routine sequels in Hollywood history, a tiresome and inept achievement that was nonetheless still a hit at the box office. While "Beverly Hills Cop" was an ordinary story with some extraordinary jokes, and thus worth the viewers' time, "Beverly Hills Cop II" is an ordinary story with ordinary jokes. It is never a good sign in a comedy when the protagonists are laughing and chuckling more than the viewers themselves. But this nervousness of the crew is justified, since nobody prepared a good story beforehand, and thus too much of the improvisations were made on the spot, yet without any clear payoff. Even Eddie Murphy cannot save the thin story: all of his five sequences where he is pretending to be someone else are unconvincing, cringe worthy and lame (would construction workers truly just leave all of their jobs on a house unfinished and simply go home just because some random guy told them to do so, without any legitimization? Would a secretary truly believe that there is a heat-seeking missile inside a donut bag just because some guy told her so?), beneath his talent, selling him too short, whereas even other kind of jokes lead nowhere (in one desperate attempt at a cheap laugh, Murphy takes a turtle in Billy's home and asks: "Where is its penis?"). Shockingly, the first good joke appears only some 40 minutes into the film (!), when Axel observes the endlessly long legs of the very tall blond woman, Karla (Brigitte Nielsen), and nonchalantly asks: "How long does it take to shave your legs?" The only aspect of the movie that is superior to the previous installment is the crystal clear cinematography by Jeffrey L. Kimball, whereas it at least marked the film debut of comedian Chris Rock, who appears as the parking valet. Other than that, this is a sad, uninspired and forced crime film that pretends to be a comedy: it is astounding how much the characters can talk without reaching anything truly funny.