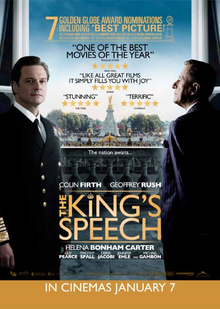 London. Prince Albert Frederick Arthur George, the Duke of York, has a problem that has been plaguing his entire life: he stutters. In order to finally cure him, his wife, Elizabeth, persuades Albert to visit the office of a certain Lionel Logue, who claims to have had success in treating stammer. Albert at first wants to give up, but changes his mind after he hears a recording of his own voice while reading Hamlet. As time goes by, Lionel is able to relax Albert and make him talk smoothly. It turns out that Lionel is not a doctor, but an actor, yet his methods work: Albert is proclaimed King George VI and gives an important speech about the British declaration of war against the Third Reich during World War II.

Even though curing stuttering is not exactly a 'high concept', "The King's Speech" turned out to be a good, unassuming little film about the topic that showed how sometimes little things in life, such as normal talking, are often taken for granted and have an unobtainable, precious status among people who do not have it. The biggest virtues are the two splendid actors, Colin Firth as Prince Albert, and Geoffrey Rush as the sympathetic Lionel who tries to cure his stammer, but also turns out to be a good friend who likes to listen to his problems (Albert complained how he was left-handed, but that his parents forced him to become right-handed, which is often the case with people with stutter problems; also mentioning how he was teased by his family for his speech): their friendship and loyalty has some emotional honesty and understanding that is pleasant to observe as it unravels through time. Some of Lionel's methods are humorous, as well, such as when he persuades Albert to wobble his lips or to swear to "relax". Still, nice as all of this is, the topic is not enough to carry the entire film, especially not at a running time of 120 minutes, and after an hour the inspiration is gone, leaving the authors forced to resort to artificially prolonging the entire second act, which is often unexciting and uneventful. As it was the case with Frears' "The Queen", it shows that the Royal family is not the most thankful topic to be translated into cinema. The last hour is tiresome and bland, losing that charm from the opening act, yet, as it was often the case with movies from that time, it included the "World War II card" at the end, which immediately enabled it a surge among the award seasons, which gave this good film misplaced superlatives among the award categories.