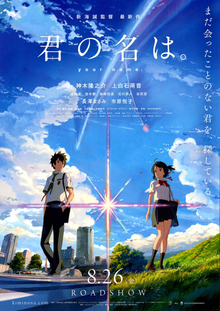 Teenage girl Mitsuha lives in Itomori, a desolate town around a lake, together with her little sister and grandmother. Mitsuha is bored and wishes she would have been born as a boy in the fancy Tokyo. One day, she notices that people around her are acting strange, telling her that she acted as if she was crazy the day before. The next morning, she wakes up inside the body of a teenage boy, Taki, in Tokyo, and realizes that he was in her body that particular day. She enjoys going to his school and touring Tokyo. The next day, Mitsuha is back in her own body. Taki and Mitsuha swap bodies from time to time, and then return back to normal. While in his body, Mitsuha arranges a date with a girl who works in a restaurant with Taki. This phenomenon suddenly stops and Taki goes to Itomori, only to find out that the city was destroyed when pieces of a comet fell on it 3 years ago, killing Mitsuha and 500 other people. When he is sent to Mitsuha's body once again, he helps evacuate the people from the city and thus save their lives. Back in their bodies, Taki and Mitsuha forget what happened and don't know each other's names. Five years later, they meet in Tokyo and ask each other's name.

Makoto Shinkai's 5th feature length film, an unusual romantic restructuring of the "Freaky Friday" concept, "Your Name" beat all expectations when it became the highest grossing anime film of its time, surpassing even Miyazaki's "Spirited Away". Shinkai is a melancholic auteur who slowly established a distinctive style with time: there is no swearing in his movies, nor vulgarity or violence, whereas he displays a finesse in crafting a rich mood just through colors in animation, all centering around a love story set in a fantasy concept (in this case, what would happen if a guy and a girl would swap bodies for a few days). A tender, gentle and patient film, "Your Name" displays that 'good-old-school' style of anime thanks to excellent, opulent characters, who all contribute to the setting, while it also dwells on the relations between rural and urban areas, past and present as well as individuality and collective tradition. It is also refreshing to spot Shinkai's humor at times, most noticeably in the opening act that plays out almost as a comedy (Mitsuha is surprised that everyone around her keep telling her that she acted strangely yesterday, as if "she was not herself", until it is later shown how Taki's mind appeared in her body, touching her own breasts to see if this is not a dream).

Some neat stylistic touches are also great (Taki/Mitsuha raises his iPhone to make a photo of a cake, and as he lowers the mobile phone, it dissolves to an empty plate; the "jump cut" between Mitsuha on the left side and Taki on the right side of the same location on the edge of the crater, as they try to find each other even though they are "invisible" from each other's perspective). However, some small omissions are still there: the movie is too episodic at times, spending only around 60 seconds on some sequences instead of elaborating more on them (Taki's date was very superficially shown; instead of showing what Taki did while in Mitsuha's body, in order to make her stand out in school, the audiences are just told what happened), which seems as if the narrative suffers from ADHD at times, whereas the ending is somewhat contrived by randomly introducing how Mitsuha and Taki experienced "amnesia" and forgot each other's names (when they could have easily written each other's name on paper or on the mirror right from the start) since this finale of emotionally close people who pass by each other, yet forgot all their past, was thematically too similar to the ending in "Sailor Moon" season one. Still, "Your Name" is a refreshing and welcomed return of uncynical, genuine emotional anime without turning too sentimental, a story of two people linked by some destiny that defies rigid reality, thus again advancing into another Makoto Shinkai gem.