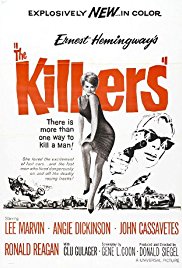 Charlie and Lee, two hitmen, assassinate a man, Johnny, in a school for the blind. Perplexed by Johnny's indiffirent reaction, Charlie and Lee decide to find out more about his life. They talk to an automechanic, who tells them how Johnny was a professional car driver, but after he started an affair with a mysterious woman, Sheila, it turned out she is the girlfriend of gangster Jack Browning, who sabotaged the tire of Johnny's car during a race, causing a crash that left Johnny in a hospital. However, Jack later hires Johnny to be a driver who will block a mail truck so that his criminals can rob a million $ from it. The plan worked, but the jealous Jack decided to double cross Johnny, frame him from stealing a million $ from the gangsters and then wounded Johnny by shooting. Upon exiting a building, Jack shoots at Charlie and Lee. A wounded Charlie arrives at Jack's home and shoots him together with Sheila. Charlie then dies while trying to get the million $ from the house.

A hard-boiled crime-thriller, "The Killers" is a surprisingly good film about the consequences of greed and dishonesty among human relations, yet today it is remembered the most for featuring the last film performance of the future US president, Ronald Reagan, who here uncharacteristically plays the bad guy (!), gangster Jack Browning, who even slaps his wife, Sheila, in one brutal scene. Even though Reagan was uneasy with this role, he delivered a proportionally good performance, together with other veteran actors, mostly the charismatic Lee Marvin. The story gives an interesting twist to the typical hitman subgenre, by first showing the two hitman killing their victim, Johnny, only for them to later on decide to explore who he was and curiously question people about Johnny's life, thereby slowly assembling a giant puzzle, which is refreshing. The storyline still seems stiff, especially during the corny dialogues involving Johnny's love story with Sheila, which seem as they were written from the 50s, yet director Don Siegel still overturns that thanks to a few of his typical sober, dark "wake up" calls, from Sheila's betrayal of Johnny just to be an obedient servant to Jack up several violent scenes (Charlie and Lee threating to throw Sheila from her 10 stories apartment window if she does not tell them the location of the money) and an depressive ending. These extensive flashback sequences involving Johnny give the movie spark and competence, yet some of the flaws are still apparent, from a few moments of empty walk up to a couple "shaky" directions of the storyline.