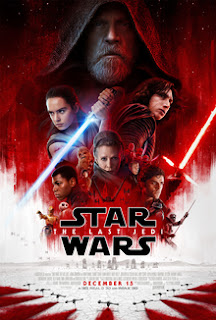 The First Order, ruled by Leader Snoke, is encroaching the rebels who try to restore the Galactic Republic. In the meantime, Rey is on the island, trying to persuade Luke Skywalker to help the rebels, but he wants to die in isolation so that the Jedi will die with him, claiming their legacy is the one failure. Kylo Ren captures Rey and brings her to Snoke. But then Kylo double crosses the Emperor and kills him with a light saber. Kylo tries to persuade Rey to destroy the whole past, both the Jedi and the Empire, and start anew, but she refuses and returns to the rebels. In a First Order attack on the rebel base on a salt planet, Luke's hologram tricks Kylo into buying the rebels time to escape. Luke then disappears on the island. Rey, Leia and the remnants of the rebels flee in the Millennium Falcon.

It seems the post-modern moral relativism and revisionism has reached even the "Star Wars" sequel trilogy, ruining it even there by suddenly presenting everything, even the classic good vs evil story as something relative and vague. Episode VIII, "The Last Jedi", seems almost as if it was directed by Red Letter Media. It is a cynical destruction of the entire "Star Wars" legacy. It is a disappointment because the main hero, Luke Skywalker, is a disappointment. "Puella Madoka Magica", for instance, was an intelligent deconstruction of the 'magical girl' genre, giving it refreshing new ideas. It tried something different, but with a point and measure. "The Last Jedi", on the other hand, is not so much a deconstruction of the saga, as much as it is spitting on it. When Rey finally encounters Luke Skywalker on the island and gives him her light saber, he just throws it away and refuses to help her or train her. Moreover, Luke claims that he wants to die in isolation, so that the "Jedi religion can die with him". Then he goes to some alien walrus, extracts green milk from its tits and drinks it. For some reason, he cannot even finish any dialogue with Rey without walking away in the middle of the conversation, and thus, ultimately, by the end of the day, they barely complete five sentences after walking for three miles in circles. When Rey finally wants to hear the reason as to why he is rejecting her, Luke says that "the legacy of the Jedi is failure" and that they were "romanticized and mythicized", just because a Jedi trained Darth Vader. This is a complete reverse of his character arc from the original trilogy.

Just as "The Force Awakens" was an unworthy ending to Han Solo, so much is this an unworthy ending to Luke Skywalker. He achieved all these Jedi powers only to in the end waste them. Worst of all, it makes no sense: even if Luke were to reject the Jedi, he would have surely reacted to Han's death and immediately went to help his sister, Leia, who is in danger. This incarnation shows Luke as a fake friend, a lost man without any purpose. Ultimately, one cannot shake away the impression that this "Star Wars" sequel trilogy took the wrong direction and that there could have been better ways to continue the saga, since the authors obviously did not have a grand strategy nor did they carefully plan the storyline beforehand. For instance, Episode VII showed Rey's visions of her parents, only for Kylo to tell her that her parents were ordinary junkyard people. These and other strange turns of the story leave these narratives feeling inconsistent, since every new movie negates the previous one. Director and screenwriter Rian Johnson takes a lot of risks, which gives the movie a few surprises, and some of them result in a few good moments. There is a plot twist some 100 minutes into the film involving a villain that is so incredible and unbelievable that it is better than anything done in all of the prequel or sequel trilogies, and one cannot believe how the producers allowed Johnson to get away with such a delicious treat. Also, some ideas were clever, such the viewers finding out what would happen if a spaceship would deliberately crash into an Empire spaceship at the speed of light, or the humorous moment when Luke orders Rey to close her eyes and reach out in order to try to "sense the Force", only to tickle her hand with a stalk of grass. Unfortunately, when the concept of a story is bad, even these good moments cannot save it. Maybe this can be seen as a commentary on the destructive nature of nihilism, yet it contaminated the entire film. Imagine a sequel to "Ghostbusters" in which Peter Venkman claims that the Ghostbusters are frauds and that ghosts don't exist? Or a sequel to "Rocky" in which Stallone went to an island, and when one of his friends asks for help to train him, Rocky replies that boxing is for stupid people and that he is now a ballet dancer? Luke in "The Last Jedi" is very close to that misguided scenario. Because, if the main character does not care about anything, why should the viewers care?