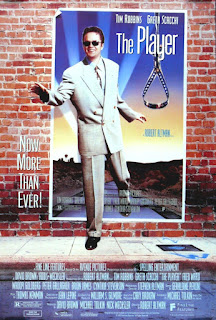 Griffin Mill is a successful Hollywood executive, and decides if a certain script is going to be made into a film or not. One day, he starts getting threats through postcards, and figures it must be from a screenwriter he rejected, but there is a whole pile of them. He thinks it is David, and kills him in an alley. Griffin then seduces David's girlfriend, June. He also allows Larry Levi to make a film out of a dark topic - with a happy ending, of course. Due to lack of evidence, the police drop the investigation against Griffin, and he accepts to make a movie about a Hollywood executive who gets away with murdering a screenwriter.

Just like Pirandello's "Six Characters in Search for an Author" was a sly play-within-a-play, "The Player" is a grand metafilm satire on Hollywood that 'breaks the fourth wall' on several occasions, the key star being, of course, the screenplay by Michael Tolkin that abounds with clever self-referential and auto-ironic moments, which are evident already in the famed opening 7.5 minute long scene filmed in one take: not only is this opening fascinating to watch, but also offers 'inner-directing' skills in the form of quietly genius dialogues, from two people lamenting how modern movies are full of cuts instead of being filmed in one long take like Welles' opening in "A Touch of Evil", up to a screenwriter - in all seriousness - trying to sell his screenplay, a story about "The Graduate" 25 years later, to protagonist Griffin in his office.

Tolkin's script is highly literate and cultured, and thus the viewers will have to have some kind of prior knowledge of cinema or will be faced with "not getting the joke" from so many insider and pop culture references ("Who was the villain in "Ghostbusters"?", asks one party guest, for instance), yet some jokes are just plain funny, anyway (for instance, after the screening of the classic "The Bicycle Thieves" in cinema, some 'out of touch' viewers lament: "What was all that fuss about a stolen bicycle?"; after Griffin kills David, an off screen quote from the producers' room is heard, saying how the happy ending in "Fatal Attraction" was dictated by the preview audiences, which foreshadows "The Player's" own ending, which is incredibly sarcastic and cynical). A couple of flaws are minimal - an occasional clumsy scene; the rather overstretched second act; the somewhat unnecessary tendency to insists on too many cameos from Hollywood stars, some of which are "throw away" 30 seconds episodes, anyway - yet the movie sets and achieves its goal of becoming a sly case study in movie making, as well as society in general, equipped with all of its flaws and compromises, and thus rightfully announced the 'silver age' in Robert Altman's career, which would last over a decade, until his death 14 years later.