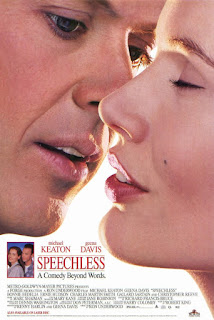 Kevin and Julia have a lot of in common - they are both suffering from insomnia and are both writing political speeches, but for the opposite political parties. When they meet in a store to buy pills to help them fall asleep, they start a love affair which lasts all until they introduce their profession to each other. As rivals in a political campaign, they try to avoid each other, whereas a snobbish TV reporter, Bob, further complicates the situation since he wants to marry Julia. Julia's party manages to win thanks to a fraud, and thus she leaves her job for Kevin.

The inclusion of many motives and elements about politics, fraud and a forbidden romance resulted in a somewhat overburdened flick with "Speechless". Of all these garments, director Ron Underwood, it seems, picked the romantic ones the least since his protagonists strive more towards humor and arguments and far less towards touching, gentle interaction. That is why the situations like the one where Julia and Kevin talk at the fountain or the one where she writes a speech for him seem precious - though it is somewhat understandable that the narrative tries to make a homage to classic 'screwball' comedies from the 30s and 40s. Despite its title, "Speechless" contains a lot of talk, yet it lacks dynamics and rhythm since the story gets lost in the lukewarm territory on several occasions. It seems the authors started a lot with the movie, yet concluded little. The excellent Geena Davis stands out the most from the cast, and carries the storyline with her charm and wit, making "Speechless" one of her rare on-screen performances in the 90s, before she would take a break from the show business world in later years.