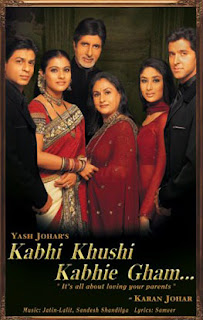 Yash is a rich businessman who has one biological son, the chubby 10-year old Rohan, and one adoptive, the grown up Rahul. Yash wants Rahul to enter an arranged marriage with Naina, the daughter of a wealthy man. However, Rahul falls in love with Anjali, a girl from a poor family and a lower caste. Yash thus disowns Rahul, who leaves India. A decade later, Rahul lives with Anjali and their child in London, together with her sister Pooja "Poo", a teenage girl who treats men like objects. However, she is infatuated with an Indian immigrant, Rohan - who grew up and arrived to London to try to reconcile Rahul with his family. At first, he keeps his identity a secret while staying at Rahul's place, until Rahul finally realizes it is his "chubby" brother. They manage to bring Yash to London and reconcile him with Rahul.

Karan Johar's 2nd feature length debut film, after his smashing success with "Something is Happening", was met with the same box office popularity in India, but is a weaker achievement with far less humor and thus with far less cover that leaves the flaws all the more apparent, a melodrama, a soap opera that would have been avoided had it been delivered by Hollywood. Having Shah Rukh Khan and Kajol again in the cast, and incidentally giving them again the same names - Rahul and Anjali - as in their previous film, Johar crafted almost a hypothetical alternative ending to "Something is Happening", in which Rahul and Anjali's romance is forbidden due to their class difference, and they are thus exiled to live in London. Unfortunately, with a running time of 3.5 hours,"Sometimes there's Happiness..." is exhaustingly overlong, dry and overstretched, with several plot points beaten to death by having them repeat 7-8 times, even though they were obvious already the first time, and thus the only interesting thing is the second half which follows the protagonists living in London, since it gives an 'insider' view of Indians living as expatriates, though even that is somewhat underwhelming since they mostly only interact between their four walls, rarely having interaction with the British citizens. Overstretched way past its prime, yet it has a few moments of refreshing humor (Anjali apologizing to Yash for accidentally breaking his vase, and then hurriedly turning around - and breaking another one from the table; teenage Pooja assembling a line of guys and announcing that she will pick a date for a party only based on rating someone on a scale from 1 to 10 - only to arrive at Rohan who cynically rates her a "2").