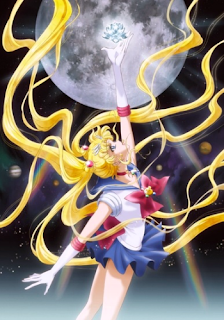 Tokyo. Teenage girl Usagi Tsukino is thrown out of her daily routine when a talking cat, Luna, gives her magical powers to transform into Sailor Moon and fight the forces of evil that want to destroy the world, controlled by Queen Beryl. Usagi is joined by four other girls with superpowers—Ami, Rei, Makoto, Minako—as well as Tuxedo Mask, actually Mamoru in disguise, who helps them. Usagi falls in love with Mamoru. With the help of the Silver Crystal, Sailor Moon manages to defeat Queen Beryl... Chibiusa, a girl from the 30th century, appears in Tokyo and asks Usagi to help her becase her time is menaced by the Black Moon clan, who rebeled against Neo Queen Serenity—during whose rule time and aging stopped—since they think the "flesh is meant to decay" with time. Sailor Moon manages to defeat them as well, including their source of evil, Wiseman. Later, Sailor Moon and the senshi return back to the present.

All those who still doubt or wonder why "Sailor Moon" was one of the chef-d'œuvres of the 90s Japanese anime should once again watch the reboot "Sailor Moon Crystal"—even though it is designed to be far more faithful to the original manga by Naoko Takeuchi, all the magic and emotions from the 1st arc of the comic-book could not be found on the screen. It is puzzling how the 90s anime and the 2014 anime have the exact same characters and storyline—yet such a vastly different output. Even more when one has in mind that this edition has only 13 episode per season, thus eliminating all the fillers and presenting a far more concise story. After a careful analysis, the conclusion is that the reason of it lies in "Crystal's" tendency to frantically follow the manga, treating it as a "holly text", which leaves the narrative strained, with no break for the characters to relax and simply be themselves, and thus the viewers cannot invest themselves in them. The R season, on the other hand, is a lot like a soccer match with a 0:0 outcome since it was the weakest in either version, manga or anime, anway, due to its numerous problems with the time travel plot.

In order to get to some good parts, the viewers have to plow through a mass of schematic, dry and bland 'superheroes-fight-against-evil' plot points—yet, the superhero stories were never about that sole pattern, which is basically always the same, but about how much ingenuity the authors would use to write something imaginative out of that routine. "Crystal" underwent a "Dragonballization": Usagi and the other protagonists are too often only warriors who are just there to fight—and not characters. In the 90s anime, the fillers actually had a point and allowed them to develop, to instill in them an emotional dimension, a humorous dimension, a spiritual dimension, an imperfect dimension... in short, they were fully fleshed out characters. Here, their (almost) only feature is that they fight. Ironically, the only moments where "Crystal" truly manages to 'twitch' from this grey area are the ones that imitate the original anime, such as the rare concoction of a cartoonish frame with a confused face of Sailor Moon in episode 19 or an angry Sailor Venus in episode 22. With a little effort, they "get it": for instance, in episode 5, Usagi wants to be typically "Japanese" polite and not take anything from Makoto's lunch box, yet, after a while, Usagi then indeed reaches for the food, while turning her head away: "Oh no... My mouth says no, but my hands says yes!" This is the true Usagi Tsukino. For a moment, they had her. Sadly, they quickly lost her in the later episode. Also, the "intercourse scene" between Mamoru and Usagi in 19 should be complimented, as well as the effort to have Usagi be less of a crybaby. Overall, it is not that Takeuchi's "Sailor Moon" manga was not great, but that the 90s anime was simply greater, with a spice added from various screenwriters (Sumizawa, Yanagawa, Enokido..) who started a foray into a territory that was more than just a 'superhero-defeats-evil' scheme. However, the authors here still proved to have some moments of inspiration, such as the first introduction of Makoto-Sailor Jupiter, the warrior of thunder, when she is shown at first just as a silhouette running from a storm in the street, until she is illuminated by thunder in the background.