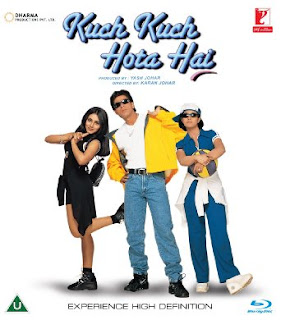 Rahul is a widowed man who is living with his 8-year old daughter Anjali. On her birthday, Anjali gets a posthumous letter of her late mother, Tina, which describes how they met: a decade ago, Rahul was a womanizing student in a University who loved to play basketball with tomboyish girl Anjali, but fell in love with the new transfer student, Tina, the daughter of the principal. Jealous at their infatuation, Anjali felt left alone and thus departed to another town. Back in present, Anjali (8) decides to track down the grown up Anjali in a kids' summer camp in order to try to make her fall in love with Rahul. Even though Anjali is engaged, she decides to marry Rahul after all.

A wonderfully sweet and sympathetic amalgamation of comedy and drama—and, somewhat to a lesser extent, musical as well—Karan Johar's directorial feature length debut film "Something Is Happening" marked the era of the 'new kids on the block' among the Bollywood cinema, since its freshness and modern tone were almost unheard off, and so unique that they attracted enough audience—even international—to enter the Top 5 among the highest grossing films of India's cinema of the 20th century. However, the film is assembled out of three segments which are not always even. The first one, where the 8-year old daughter is reading about how their parents met as students in a University, is the film's finest hour: almost every little scene is filled with so much detail, color and positive energy it is a blast, whereas the setting—from the campus on the beach up to the modern clothes of the students and cheerleaders—seems as if it plays out in America.

The comic interaction between Rahul and Anjali (brilliant Kajol) has some indescribable chemistry, including their gestures, some of the jokes are howlingly funny (Rahul meeting Tina for the first time, trying to act cool by making fun of the principal - not knowing she is actually his daughter!) whereas others are just plain irresistibly sweet (the attractive Tina wonders why the students are always looking after her, and Anjali explains: "The guys are looking at you because... Hmm-Hmmm... And the girls are all curious at whom the guys are looking at, so they look at you too!"). The University segment is undoubtedly excellent, a 'tour-de-force'—but unfortunately the film then moves to the other two segments, which never repeat such ingenuity, and instead just settle on empty walk in the form of too much singing and the overlong segment where the grown up Rahul and Anjali re-unite in the summer camp—the film just doesn't know when to stop, and thus overstretches itself to 3 hours, until it depletes the viewers' concentration. Some jokes in the finale just seem strained—for instance, the moment where Anjali (8 years old) and the grown up Anjali call the reception, and Rahul accidentally talks over the phone to the other Anjali again, could have been perfectly romantic, but it just turned silly due to a lame idea that he could somehow not distinguish the voice of his little daughter from the grown up Anjali (!). It is a pity, since there is a great film in here—but it just needs a good editor to trim it to two hours. Overall, it seems that the first third of the film was so fantastic that rarely any contemporary Indian film could have reached it—not even the film's own second and third act.