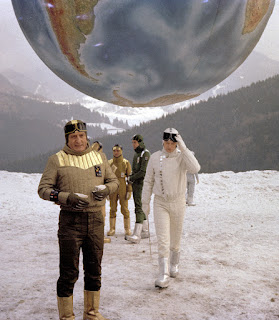 In the year 2484, the main computer predicts that a comet threatens Earth, and thus the council concludes that the only way to avoid a catastrophe is to send four people 500 years back in time to obtain a long lost notebook of a future icon, Nobel prize winner and scientist Adam Bernau, which contains a formula to move continents. They send Filip, Emil, Emilia and Dr. Jacques in a time travel machine disguised as a car to the Czech city of Kamenice in 1984, to get the notebook before the 12-year old Adam puts the house on fire - but they cannot find it. The four thus rent a hotel room and present themselves as geodetics in order to stalk Adam from elementary school to his temporal stay in the hotel, hoping to find the notebook. One man falls in love with Emilia, and she has to gently refuse a relationship. After failing to find the notebook, the four return with the car to the year 2484 - but they accidentally bring Adam's mentor with them, who fixes the main computer which corrects its calculations and thus, it turns out, there was no danger for Earth in the first place.

One of the most noteworthy European - and worldwide - TV shows from the 80s, Czech time travel Sci-Fi comedy series "The Visitors", somewhere also known as "Expedition Adam '84", by writers Ota Hoffman and Jindrich Polak, expressly achieved cult status for its audacity, which did not only stem from the highly unusual and innovative set designs, costumes, props and special effects, amplified by German co-funding of the production. The opening three episodes show a 25th century world with a lot of imagination and ingenuity, but also humor and wit, obvious already in the opening of the pilot episode where Emilia is amusing himself by trying to solve a screen puzzle where she has to re-arrange and "filter" parts of two paintings by Picasso and Rousseau which were entwined together. This introduction is set up with a lot of awe, especially in the location of the car in the middle of a quarry, yet, unfortunately, already in episode 4 do "Visitors" start displaying trouble with screenwriting, with the trademark of some sort of that genre - namely that while people from the future are interesting, once they enter our present time, the plot becomes routine and standard. By having the four protagonists from the 25th century disguise themselves as ordinary people in a hotel of the 20th century, the story loses its humor and charm from the beginning and suffers from a "stranded ship" syndrome - it does not know what to do with this setting.

As such, out of 15 episodes, at least 7-8 seem uninteresting, bland or even boring in the middle part, wasting too much time on empty walk in the form of the four protagonists stalking the 12-year old Adam or trying to repair malfunctions on their gadgets. It was also a wrong decision to have Adam be a 12-year old instead of a grown up student, which could have offered far more interaction between him and the four "tourists from the future". There are some fascinating gadgets in here (for instance, they put a small camera on an item, and then "spray" the mirror in their room and have a live broadcast of it; they use an iPhone of some sorts in order to read data they need), but they cannot compensate for such a disproportionate amount of ordinary moments, such as the four visitors spending their time on a dinner party or the doctor getting mistakenly sent to a hospital for a health check. It takes all the while until episode 14 until the storyline returns back to its creative tracks from before, leaving a sad feeling of a missed opportunity of a tighter narrative for such a high concept, though episode 15 offers one of the grand examples of howlingly funny chaos, the Zenith of Czech humor that is a fantastic fun: it involves a hilarious long sequence where the four protagonists travel with their high-tech car under the surface, and resurface every now and then on the most inappropriate places (their periscope "pops out" from the ground in the middle of the cinema, causing panic among the viewers), all culminating in the editor's office where they want to steal the photo of themselves before it gets published in the newspaper, so they send a chicken dancing and juggling eggs to distract the journalists, in an unforgettable moment of absurd perfection.