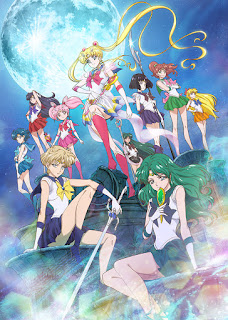 After the last events, Usagi, Rei, Ami, Makoto and Minako are faced with another threat for the world, in the form of Pharaoh 90, a mysterious alien entity from the Tau star system that took control over Dr. Tomoe's body and made him the chief of Death Busters, an organisation that seeks the Holy Grail in order to start a colonisation of Earth. Usagi transforms into Sailor Moon and manages to save Earth, with the help of two new Sailor Senshi, Sailor Uranus and Neptune, as well as dr. Tomoe's daughter Hotaru, who is Senshi no 3., Sailor Saturn.

Season III of the "Sailor Moon Crystal" reboot anime is an improvement compared to the first two seasons: it was given a more 'animesque' character design that suits them more than the manga look, and they were given more room for character development as well, most noticeable in a couple of refreshing and welcomed humorous moments that reminded them of their best days, with at least two moments reaching the creative zenith and are so genuine that they seem almost as if they came from some lost scene from the original 90s anime: in the first episode, Usagi greets Mamoru by saying: "Where is my good morning kiss?"; whereas in episode 2 Usagi transforms into a Mugen Academy student with glasses to sneak into the building, but is then caught by a girl from the "Discipline Committee", who asks her to identify with her name, rank and class. There is also episode 5 where Usagi and Mamoru's relationship is strained, they sit quietly on the couch with the comic-book subtitle adding the word "Silence", until Chibiusa manages to make them up by asking them to help her with her homework.

Unfortunately, this strong start is not able to reach the threshold potential that would initiate a complete rejuvenation of this anime version, since episode 5 is followed by inferior 8 episodes that again return to the standard, dry or monotone level of the previous seasons, featuring again too many grey moments of the Sailor Senshi only speaking stale speeches or presenting the mythology that takes up way too much time. Episodes 7 and 8 are just endless exposition, whereas the rest is just the finale. This is disproportionate: 50% of the story is spent on the character development, while the other 50% are just a long final battle. In the first anime, the finale would encompass only around 10% of each season. The female villains drop dead like flies, and their life span is one episode—further complicated by the manga notion that they are outright "killed" by the Sailor Senshi, who act too much like extras. The 90s anime demonstrated a remarkable sixth sense for epic, unrelenting, cathartic battles with an 'inner directing' skill that managed to engages viewers with ease, yet here the 5 episode finale seems strangely monotone and colorless, as the viewers are left with a feeling that they just want to skip it for its obligatory tone. One cannot also simply escape from the bigger picture here, namely the impression that this is by default a proxy war between the classic 90s anime style vs. the high-tech, CGI 2010s anime style, leaving the aforementioned as an easy winner. The iconic (lesbian) Senshi, Haruka and Michiru are simply greater characters in the 90s version, since they seem too one dimensional and abridged in this edition, which did not leave too much room for them to develop. Still, season III shows a remarkable progression, and it seems the creative "spillover" from the 4th season, obvious in the final minutes of the last episode, announce a 'delayed momentum' which just waits to happen.