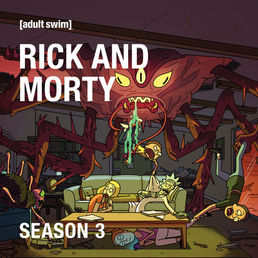 Rick manages to escape from prison and destroy the Galactic Federation by ruining their currency, even though he was also persecuted by Ricks from alternate dimensions, who wanted to kill him, as well. The aliens abandon Earth, but Jerry seeks divorce from Beth, since she is unwilling to choose Rick over her husband. Rick thus continues his many adventures with Morty into parallel Universes. Finally, Jerry and Beth reconcile while Rick is abandoned.

Season 3 was the tipping point where "Rick and Morty" definitely lost the balance between the good and bad, falling into meaningless, repetitive episodes without any kind of point or strategy. Each season was weaker than the previous, and congruently, season 3 offers the least: it has only two truly great episodes (3.1 and outstanding 3.7), while the remaining 8 are weak and fall too often into trash. Similarly like "South Park" or later seasons of "Family Guy", even "Rick and Morty" sailed into 'extreme entrtainment' by deciding to keep the viewers' attention through splatter violence, disgust, ill-conceived ideas, shlock and shock, instead of relaying on some sophisticated narrative and inspiration. Rick is far more interesting as a character when he talks about his cynical philosophy about life, yet here he was demoted to a simplistic action figure. Episode 3.3, in which Rick has transformed himself into a small pickle, and thus has to battle cockroaches in the sever, is probably the worst episode of the show till date, whereas bad ideas run galore, from a giant Summer whose skin has been turned inside out by a laser ray in 3.5 through Morty vomiting a three feet long green worm hanging from his mouth for a minute in 3.8. Actually, in one episode, 3.9, it is discovered that a kid, Tommy, has been trapped in the imaginary world of "Froopyland", and thus mated with the creatures there so that they could breed creatures with human flesh, which he would then eat himself to survive, so Rick himself ironically says: "That's it! I'm out of here!", and then opens a portal and escapes as soon as possible with Beth. There is no reason for the viewers not to feel the same, as well. The only highlight is episode 3.7, a stroke of genius and intelligent writing, by showing the Citadel, a place where all the thousands of Ricks and Mortys from other dimensions gather to form their own society, yet fall into the same corruption and injustices against themselves - but alas, to get to that episode, the viewers have to pave their way through a mass of rubbish of inferior episodes.