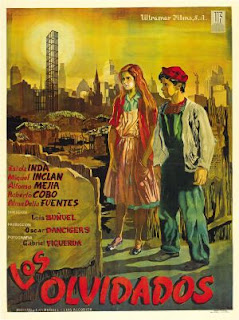 The slums of Mexico City: poverty caused groups of kids to rob people and turn to criminal activity. El Jaibo, a teenage delinquent who escaped from jail, returns as the head of one these gang and they plan to steal the money of a blind man singing on the street, but he stops them and hits the leg of one of them. As a revenge, Jaibo and his gang follow the blind man and later beat him up. Jaibo blames his prison sentence  to Julian and thus kills him, thinking the latter is a snitch. The murder is witnessed by Pedro, Jaibo's gang member. Jaibo visits the Pedro's poor family because he is attracted to Pedro's widowed mother. Pedro finds a job at a blacksmith, but when a silver knife is stolen, Pedro is blamed and sent to a farm school. Pedro is aggressive, but the principal gives him 50 pesos to buy him cigarettes, in order to build his trust. On his way, Pedro is robbed by Jaibo, who also stole the knife. Later, Jaibo kills Pedro. In an ambush, the police shoot Jaibo.

Often regarded by film critics as one of the finest movies of Mexican cinema of the 20th century, Luis Bunuel's "The Forgotten Ones" is a dark and depressive social drama that realistically takes a glimpse at the theme of poverty, which is even more intense since it is shown from the perspective of children and teenagers. Congruent with such an unglamorous topic, Bunuel crafted a blunt, direct, almost explicit film in order to show such reality without any "false idealism": teenage delinquent Jaibo and his gang want to rob a blind man, and later do not even hesitate to beat him up; Pedro's mother says this to the surprised civic service officer: "Why should I love my son? I don't even know who his father is."; Jaibo gropes and forcefully wants to kiss a girl, Meche, while her brother does not care when he hears his sister screaming while working outside; a kid drinks milk directly from the udder of a donkey in a farm.

The only break from this reality is Pedro's surreal dream, filmed in slow motion, which hints at the director's frequent fascination with fantasy as the escape from depression. Throughout these scenes, Bunuel illustrates a bigger strategy by giving a case study of poverty — already in the opening scenes of fancy, grand images of skyscrapers of a modern metropolis, the narrator says: "Almost every capital, like New York, Paris, London hides behind its wealth poverty-stricken homes...", hinting at the divide between the upper class which is built at the expense of a lower class, almost as in Yin and Yang, whereas he even hints at the theories of poverty, such as restriction of opportunities and a distorted meritocracy in which the only way to survive and climb through the ranks is through theft, murder, violence and other criminal activity. Even Pedro, who is given a chance to reform in a farm school, is sunk back by his old friend Jaibo, giving the movie a gloomy perspective of social determinism in a cycle of poverty from which there is no escape, evident also in the dark ending. An excellent film, reminiscent of the 'raw' aesthetics of 'Italian neorealism', and a surprisingly "normal" storyline for Bunuel.