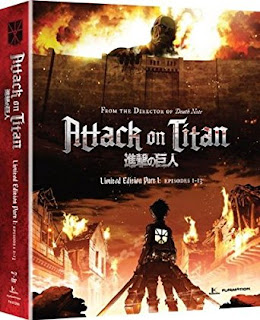 In a post-apocalyptic future, mysterious, 200 ft tall giants appeared, called Titans, and killed off most of humanity. The remains of mankind live in a town shielded by giant walls, yet Titans attack once again and kill the mother of teenager Eren Yaeger, who thus swears revenge and joins the military to fight the Titans. His friends are Armin and Mikasa. During another attack, Eren is eaten by a Titan, but somehow mysteriously survives and finds out he can transforms into a Titan himself when he is wounded, by biting his finger, and then transform back to a human. The military capture a female Titan, who turns out to be also a human, Annie. This gives military the reason to explore further.

One of the most hyped animes of the decade, "Attack on Titan" is basically a restructuring of the popular "mecha genre", except that instead of giant robots, the people have to fight humanoid, Zombie giants, yet the story lacks highlights, pathos and the grandeur of "Evangelion" to truly overwhelm on a higher level. The setting is mysterious and stimulative, posing many questions about the origins of the Titans that attack and eat humans, yet, unfortunately, the 1st season refuses to answer any of those, leaving the viewers rather stranded and frustrated by a lack of any conclusion. The characters are one-dimensional, humorless and stiff, which exacerbates the impression (especially since Eren, Armin and Erwin all have a similar sounding name, which leads to confusion at times), yet the action sequences do have their moments of impact, especially the "Spiderman"-style way the warriors use wires to swing from building to building to maneuver around the Titans in order to try to hit the back side of their neck, their only weak spot.

The best episodes are arguably 17, 18 and 19, because they display a genius strategy of the warriors who leave the walls for their expedition: since they have no technology, they ride on horses and disperse on a meadow for several miles, acting as a "human radar" since flare guns fired by the edge of the group will be seen from the horizon and signal if a Titan is nearby, thus allowing for the core of the group to avoid dangers by going left or right on their route. This leads to several exciting situations, aesthetic shot compositions and a sense for adventure in the open, culminating with a group having to go through a forest to ditch Titans running after them. Unfortunately, except for maybe episode 25 (featuring several great sequences, including a religious community attending a mass that gets squashed by a female Titan when its foot crashes through the church, or the epic scene of the female Titan grabbing onto a wall with its fingers to stop, thereby causing several people to get ejected from the windows of the building) and a few deeper meanings (the leitmotiv of birds that fly over the walls as a symbolism for the protagonist's yearning for freedom), a majority of the episodes suffers from a too slow pace which takes too much time to finally get going, relaying too much on a dark tone, yet it cannot compensate for the standard execution. Answers will be found in season 2, but on its own, the viewers are simply stuck with the impression that season 1 did not progress and develop the storyline to a truly satisfying level.