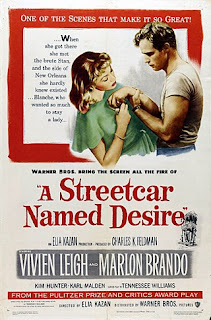 New Orleans. Blanche DuBois, a woman nearing 40, lost her family estate, "Belle Reve", as well as her job as a teacher in Laurel, Mississippi, and thus, now bankrupt, has to stay at the apartment of her pregnant sister, Stella. Blanche is cultured and refined, which causes her to clash with Stella's husband, Stanley Kowalski, a Polish worker. Blanche meets Mitch and starts a relationship with him, hoping that she will finally marry and settle down. She also feels guilty for the death of her husband, who committed suicide after she scorned him for sleeping with another man. However, Stanley discovers her dark secrets: back in Laurel, Blanche slept with numerous men, even with her students. This causes Mitch to give up on his plans to marry her. As Stella goes into labor in the hospital, Stanley again argues with Blanche and rapes her. Blanche loses touch with reality and is thus sent to a mental asylum.

One of the most critically recognized films of the 50s, "A Streetcar Named Desire" is still an excellent film adaptation of the eponymous play, even by today's standards — though it is somewhat overburdened with too much symbolism and excessive dialogues here and there. It is an "actor's film", and thus director Elia Kazan decided to minimize his director's interventions in order to maximize the focus on the four actors who carry the film, all of which are fantastic, ranging from Marlon Brando up to Vivien Leigh, and their electrifying dialogues. Playwright Tennessee Williams, who was gay, constructed "Streetcar" to reflect his often theme of society's prejudice towards an individual's inner desire: despite the censorship of the conservative Hays Code, it is obvious that Blanche caught her husband in a gay relationship and caused him to commit suicide due to her intolerance towards his desire. This theme goes full circle, since she is also intolerant towards Stanley's hedonistic desire, which she considers primitive, while Stanley and Mitch later judge Blanche due to her promiscuity. Blanche is also the one who judges Stella's desire in the form of a sexual addiction towards the brute Stanley: in one scene, Stella is in bed after reconciling with her husband, and has an interesting exchange with Blanche ("He smashed all the lightbulbs with the heel of my slipper". - "And you let him? Didn't run, didn't scream?" - "Actually, I was sorta thrilled by it!").

The conflict between the two main protagonists is the driving force of the storyline: Blanche is liberal, feminist, trying to be independent or at least equal to men, living in an imaginary world ("I don't want realism, I want magic!") serving as escapism from the harsh reality and her fear of staying alone as she approaches 40 ("I'm fading now! I don't know how much longer I can turn the trick!"), whereas Stanley is conservative, patriarchal, primeval, a lower class worker, and despises illusions since he wants to live in the world the way it is. In order to underline the clash between Blanche and Stanley, Kazan even added a metafilm touch by casting two actors of completely opposite ways of acting: the "raw", method acting of Brando which is juxtaposed with the "artificial", idealized acting of the old school Hollywood of Leigh, giving it another layer of dynamics. They are allegorical for id and super-ego, each trying to conquer the other one's psyche. Certain complaints could be aimed at the overlong running time and too lengthy, ponderous monologues that do not always have a clear point, as well as a "too theatrical" setting of the "confined" storyline at times, though the latter can be somewhat given amnesty since it was adapted from a play. Nonetheless, "Streetcar" is a strong, powerful and ambitious film, a one that works like a fuse on a dynamite that slowly burns until it explodes, congruent to the explosive inner dissatisfaction of the protagonists who simply have to snap near the finale.