The Story of 90 Coins 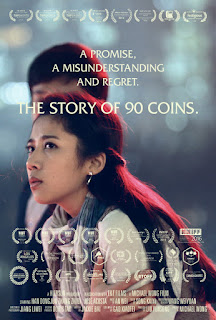 Beijing. A guy, Wang, falls in love with a girl, Chen, and persuades her to give him 90 days to prove that he is worthy of marrying her. In order to do so, he puts every coin in a sealed envelope with notes of each day, until they reach 90 coins. Pursuing her career, Chen forgets about the box and accepts an invitation by a French businessman to go to Paris. However, she then stumbles upon the box with the coins and remembers all the wonderful days with Wang.

"The Story of 90 Coins" is an uncynical, refreshingly honest, emotional and innocent in presenting the simple love story, with the two lead actors giving very good performances, especially the charming Zhuang Zhiqi. Some of its best moments arrive swiftly, in the comical way, almost reminding of a romantic comedy at times, such as the snake sequence in the tent and the sequence where Wang anonymously plays a love song for Chen over the radio, but she says "Who's that? What a stupid guy". Also, the movie is filmed with remarkable technical level and expertise for a first film by director Michael Wong, from the crispy clear cinematography up to the editing and sound, with only minimal flaws here and there.

However, there are 2 problems with the film. The sole concept is great - a guy persuades a girl to give him 90 days to prove that he is the right for her to marry him - but "90 Coins" is so fast in exchanging its vignettes that the viewers wish it simply slowed down and took more time to develop these episodes in the story. Take for instance that snake scene - how did the couple get there? What did they do afterwards? Did they stick around in the tent later on to simply enjoy the nature after that "incident"? Or the sequence where Wang carries Chen on his shoulders because she is sick - it is sweet, but how did he find out she is sick? Where did he pick her up (at her apartment, maybe, or on the street)? And how did she react when she got well? Did she thank him? While these moments are very sweet, they would have been even better if the viewers had a wider context in which they happen. Some of them are just too short to truly engage fully, though that it understandable due to budget constraints. The second problem is that the chronology of his plan is not displayed entirely linear and clear. Yes, a flashback is a legitimate director's choice. Yes, several days in that 90 days period are indeed shown. And yes, it is touching when she "stumbles" upon the box of coins she almost forgot in the room, which triggers her memory of these days. However, it would have been nice if the viewers got to see "Day 1" and "Day 2", to immediately get the impression that it started - and how it started. This chronology has a middle and an end, but not a beginning. It would have been great to see what he did on the 1st day to "kick off" his 90 day plan, and on the 2nd day. This would have set the tone for the film. Overall, this is still a sweet little first film, which announces that the director has a lot of potential for a feature that could elaborate the events further.