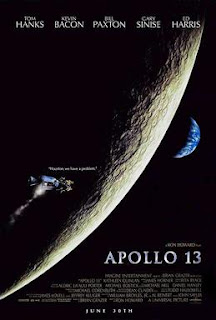 In '70, NASA sends another manned mission to the Moon, named Apollo 13, but it quickly justifies the reputation of "13" as an unlucky number: namely, as soon as it is in space, its oxygen tanks suddenly explodes, thus leaving its three astronauts - Jim Lovell, Fred Haise and Jack Swigert - in peril. On Earth, the Houston command centre, led by Kranz, realizes that the astronauts cannot land on the Moon with such damage, and instead re-focus their efforts on bringing them back alive before they run out of power. Passing by the Moon, the craft uses its gravitational pull to catapult back to Earth, and thus, despite freezing temperatures due to a saving of heating power, the three astronauts manage to return safely home.

A biopic about a dangerous manned mission to the Moon that went terribly wrong, "Apollo 13" gives a proportionally rather well assembled chronicle of events, though it sometimes comes off less cinematic and more as a schematic 'PowerPoint' presentation of the event. The first half an hour serves as a bland intro, wasting too much time on Jim Lovell's family and dry preparations of the mission, yet once the craft launches into space, the movie lifts up as well, displaying a few suspenseful moments and bravely showing the unglamourous side of astronauts in space, which is not always as idealized as some like it to present. Several comical moments are refreshing (upon turning off the electricity in the navigation panel to save the power in the craft for later, and just letting it drift in space, Lovell's joking comments: "We just put Sir Isaac Newton in the driver's seat") whereas the most genius moment arrives in the NASA office, where engineers are given the assignment to somehow find a way to connect two filters using only spare parts which can be found in the Apollo 13, so that the astronauts can replicate it themselves on the craft before CO2 levels reach a critical point there. However, Ron Howard's direction and the screenplay by William Broyles, Jr. and Al Reinert are not always that inspired, since the movie is a tad overlong and overburdened with conventional dialogues, especially in the inter-cuts that focus on Lovell's wife and family on Earth, which tend to turn melodramatic and empty at times. The most was achieved from great actors, excellent Tom Hanks and Kevin Bacon, but also by veteran actor Ed Harris as the 'maverick' flight director Kranz who simply refuses to let the three astronauts perish in space, whereas one has to compliment the film crew for their painstaking effort by filming many space sequences in a reduced gravity aircraft, which realistically conveys a feeling of zero gravity among the three actors.