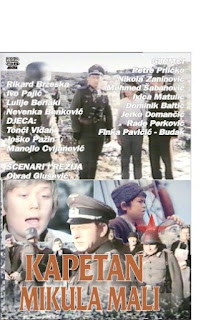 World War II. Due to Fascist offensives, Captain Mikula is often transporting civilian refugees to safe islands from Dalmatian coast in his ship. During one such trip, Mikula gets a secret assignment from a partisan to get in contact with an English parachuter who wants to get to the Vis island to get in touch with Tito. However, Mikula's grandchild, Mikula little, and two boys, his friends, secretly came along in his boat. When Mikula gets arrested by the Nazis, Mikula the Kid manages to get him released by tricking the Nazis into thinking he will tell them where the Englishman is. In a daring mission, Mikula the kid manages to detach a ship from the Nazi navy and return to the coast. Mikula the grandfather gets killed by the Nazis, but Mikula the kid and the two boys manage to transport civilians and the Englishman to the Vis island.

Even though it was one of the most popular partisan movies of its time, and spanned an eponymous TV show, "Captain Mikula, the Kid" did not age well by today's standards: it is a sympathetic little movie, yet overstretched itself way beyond its prime, featuring too much empty walk and lax tone that starts losing the viewers patience towards the second half. Director Obrad Gluscevic took up a bizarre decision to have a "kids war movie", which is an oddity, even featuring a scene where one of the kids holds a gun, yet, thankfully, refused to go overboard and to show children actually shooting and killing someone, which somewhat alleviates this controversial decision and keeps it in rather good taste. Still, "Captain" lacks highlights - the kids don't do anything except get in contact with the English parachuter and detach a boat from the enemy navy, which is too little the keep the viewers attention during the weaker parts which are basically just 'filler', and thus a little more ingenuity would have been welcomed. Still, it is an overall solid and easily watchable, unassuming film, managing to work as stable entertainment.