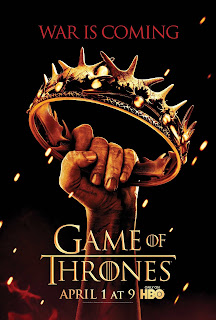 The fight for throne still continues. The 17-year old King Joffrey Baratheon alienates people and his servants more and more with his spoiled and sadistic nature, including killing babies suspected to be former king's Robert Baratheon's bastard children, yet his uncle Tyrion Lannister has no choice but to help him defend the city of King's Landing when Stannis Baratheon - allied with dark forces of witch Melisandre - starts a siege of the city with his navy in order to claim the throne. The city is saved, yet Tyrion is badly wounded and recieves no credit for his defence... Robb Stark advances south against the Lannisters, but his plans are threatened when his aid, Theon Greyjoy, rebels and takes over the rule of Winterfell on the north himself... Daenerys Targayen and her allies manage to save themselves from the desert when they reach the city of Qarth. Her three dragons are stolen by local Xaro, but she manages to get them back... Jon Snow is captured on the north by Ygritte and her wildlings. Also, the Zombies awaken from the snow and start marching south.

The 2nd season of the famed "Game of Thrones" series continues with all the complex takes on the effects of the unspeakable brutality and decadence stemming from the greed for absolute power for the throne, a primitvism reminiscent of the worst days of Bolshevism or Byzantine Empire, yet it is still a notch weaker than the 1st season. Only episodes 2.1, 2.6 and 2.9 are truly excellent, while the rest is good, yet heavily overstretched: by following a dozen parallel stories, encompassing almost a hundred characters, the story bloated and exhausted itself into excess, not knowing when to stop. The dialogues in the 1st season were better written, since here a lot of lines end up formulaic and in empty walk. Episode 2.1 gives a worthy viewing experience - one clever moment is when Daenerys and her allies are lost in the middle of the desert, exhausted, and are not sure which way to go. She then simply takes three horsemen and sends them in three different directions - north, south, east - and orders them to return if they find any populated place, thereby eliminating wrong directions her caravan could take. Another gem is found in episode 2.6: a girl, Arya, works in the office of Lord Tywin Lannister. Unbeknownst to him, she is actually the sister of Robb Stark, who is battling Lannisters of the front. One day, she takes a document detailing plans to attack Robb, hoping to help her brother, and runs away from the office, but is caught by Tywin's servant Lorch outside. Just as Tywin's door open, and Lorch is at the doorstop to report what he found, the latter falls dead - Arya sent assassin Jaqen to intercept and kill Lorch, and thereby saved herself from being revealed just in time.

The siege of King's Landing in 2.9 also rises to the occasion - the trick that a small ship with explosive liquid is sent in the middle of the navy, and then ignited into exploding between them, is clever - and benefits from aesthetic location of Dubrovnik, the 'pearl of the Adriatic'. A nice little twist is found in episode 2.10, as well: when he is outnumbered and faced with an ultimatum to surrender at Winterfell, Theon gives an epic, heroic speech to his 20 soldiers, triumphantly chanting how they should die in battle and how people will remember their glory - but is then knocked unconscious by one of the soldiers in exchange for the outside forces to pardon them. Definitely one of the rarest and hilarious examples of humor in the series. Unfortunately, the events between those highlights are questionable, wasting too much time on overlong subplots which (at least in this season) lead nowhere. Also, the storyline suffers from some unnecessary nudity and too savage violence. Universal acclaim should be given to the cast, though, with Peter Dinklage giving an excellent performance as Tyrion Lannister, who stoically refuses to be labelled only as a dwarf, as well as genius Sibel Kekilli as his love Shae, whereas Charles Dance is also fantastic in his quietly brilliant role as king Joffrey's grandfather, Tywin Lannister. Season 2 is somewhat like zapping through ten different channels on TV every five minutes, non-stop: each of them is interesting, but when there are simply too many of them, you cannot dedicate yourself truly to any of them.