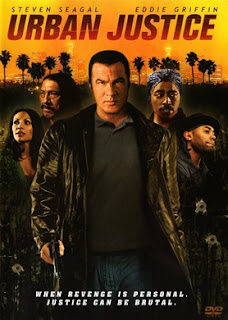 Police officer Max Ballister is killed on the streets on Los Angeles near his home. After the funeral, his father Simon decides to find his killer. Simon rents a shady room in the L.A. suburb known for violent gang wars, and starts questioning people, even thugs, in order to get some information. It turns out that the order was given by police official Shaw, who works together with gangster Armand in order to smuggle drugs into town. Simon kills Shaw in the finale, and lets Armand go since he "doesn't have any beef with him".

Viewers familiar with the types of movies Steven Seagal stands for - a symbol of inferior intellectual, philosophical or creative range, relying only on brute force - will be pleasantly surprised that his film "Urban Justice" miraculously turned out tolerable for a change. A lot of credit for that should be given to director Don E. Fauntleroy who refused to make it typically too serious, i. e. banal or trashy, and instead inserted a few comical-ironic moments that elevate the level of the story here and there (in one sequence, one woman asks Seagal's character, Simon, where he was taught how to fight with thugs on the street, and he jokingly replies that he was "taught all that on home video"), though the supporting cast easily overshadows Seagal, anyway, from the opening scenes where Max's wife is riding on his back and doesn't want him to go to work, up to the stand-out role by Eddie Griffin as the nutty gangster Armand (in the finale, he meets an African-American gangster from the East Side dressed in a completely white suit, and cannot resist but to ask: "Why did you come here dressed up as a tampon?!"). Unfortunately, the story is still predictably thin, with several typical action cliches contaminating it (dozens of gangsters shoot and always miss Simon, but he always hits them; gangsters aim at Simon's head with the pistol at close range twice, yet he is still somehow able to be faster (?) than them pulling the trigger and catches their hand...) whereas the ending is disappointingly anticlimactic and contains an example of "selective justice", in the end not amounting to much than an easily watchable, easily forgettable flick.