I Often Think of Piroshka 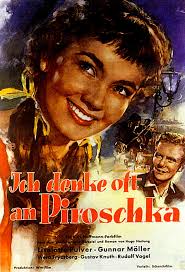 In 1955, writer Andreas is driving in a train and remembers his events 30 years ago: in '25, Andreas is a student who travels from Germany to the Balaton lake in Hungary. He meets a German girl, Greta, but they are separated before they can build up their relationship. Andreas travels to a village and stays in the house of a train stationmaster, where he meets a cheerful Hungarian girl, Piroshka, and they fall in love. When Andreas gets a letter from Greta, he travels to her, and is followed by Piroshka, which causes an awkward encounter. Piroshka leaves disappointed, and Andreas returns to the village, and unsuccessfully tries to meet her again. As he leaves in the train, Piroshka stops the train and they kiss.

During its premiere, Kurt Hoffmann's humorous romance "I Often Think of Piroshka" became one of the most popular German films of the 50s, and was subsequently rerun on German TV a thousand times, though by today's standards it has not aged well and feels too thin and lax. Hoffmann gave a twist to the popular German Heimatfilm subgenre by setting it on a location outside Germany, in Hungary, yet keeping several of its trademarks, such as landscapes of nature and good people the viewers can relate to. Unfortunately, the simplistic storyline has too much empty walk, bland, dull or arbitrary moments, because, even though it starts off good, nostalgic and romantic, it slowly oozes off into routine since the movie cannot be carried by only Andreas and Piroshka walking across the meadow or dancing all the time. A little more interaction between the couple, a little more humor or charm, a little more ingenuity would have been more convincing and decisive in a more positive outlook on the film, instead of just relaying on them just being there and giving an incomplete ending. One of the rare examples when the characters engage more is when Andreas secretly goes to visit Greta in her hotel, but is surprised when he finds out Piroshka followed him as well - the interaction between the three of them gives them more dynamic for a moment, especially since Greta wears fancy clothes, while Piroshka wears a peasants' skirts and is soaked from the rain, hinting at how they are from two different worlds. The main highlight is the main actress, Liselotte Pulver, who is so charming, sweet and innocent that she manages to carry 90% of the film - actually, she is so great in this, one wishes the movie was better just for her, as well.