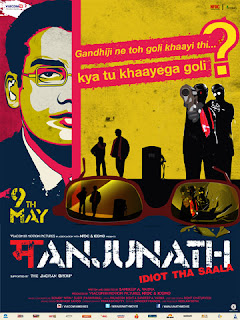 The story of Shanmugan Manjunath, a young manager for the Indian Oil Corporation who was sent to inspect local gas stations in Uttar Pradesh and discovered the scandal of people mixing fuel with kerosene, which has catastrophic effects on the environment. Even though the gas station's official Goyal ofered him a massive bribe to keep quiet, Manjunath refused to ignore the coruption and informed the authorities. He also discovered that Goyal's men were buying kerosene on the black market for a much cheaper price. On 19 November '05, Manjunath was shot and killed by Goyal's men. Even though his poor parents thought justice will not be done, the courts sentenced Goyal to death, and his accomplices to a life in prison.

A very honest and ambitious biopic, "Manjunath" is an interesting outcry at the corruption in India's society, here in the form of the fuel mafia, as well as a worthy homage to its hero, Shanmugan Manjunath, who refused to keep quiet about such injustice, and thus became a symbol for the movie's theme: integrity. Director Sandeep A. Varma shows a lot of sensitivity in depicting Manjunath's difficult situation: on one hand, he is compelled to report about the irregularities involving mixing kerosene and fuel ("He looked at me as if I were his enemy. But wrong is simply wrong"), but on the other hand, he is tempted to ignore everything because he might lose his job, which would be catastrophic for his low-income family, and to accept the bribe. All this is far from the Bollywood glamour, and - luckily - without dance or singing sequences, staying true to its serious-dramatic tone. The film is directed in a rather straightforward manner, with only an occasional inventive moment that breaks that repertoire, such as the scenes where Goyal is imagining to talk with Manjunath's ghost after the latter's death, trying to put the whole blame on the victim, or the rock musicians seen playing a gig, which 'breaks the forth wall'. Overall, a very decent, somber and realistic movie, with one stand-out moment when Manjunath's parents read a letter of an 80-year old woman who gave them a donation to go to the court ("Do you really think you are the only one who has the right to defend this lad? He is a hero.") whereas the story flows elegantly and smoothly.