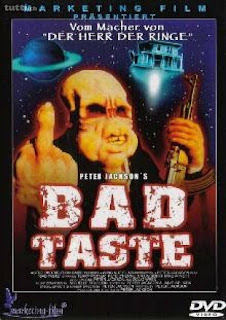 A mysterious phone call for help is received from a small town named Kaihoro, saying they were attacked by aliens. The Astro Investigation and Defense Service (AIDS) thus sends a five man team to counter the aliens. They discover the 75 inhabitants of Kaihoro are gone, and replaced with aliens disguised as ordinary humans in blue shirts. Derek captures one man suspecting to be an alien and leaves him hanging from a cliff. He later has to use a machine gun to fight against alien henchman. Upon discovering the aliens want to use human flesh for their fast food chain, Derek, Ozzy, Barry, Frank and Giles start a siege of a house where the aliens finally transform to their original state. An alien escapes in the flying house into space, but is killed by Derek anyway.

A blast from the Southern Hemisphere, Peter Jackson's independent feature length debut film "Bad Taste" is the greatest trash film of the 80s, a self-consciously ironic jab at itself that self-consciously knows it is a B-film, obvious already in its title, and does everything out of that situation. It has violence and gore, yet it is nowhere near as intolerable as Jackson's later hard-core "Braindead" splatter-excess, and thus far more watchable, whereas the effects and props are so cheap and fake it is difficult to get offended by them, anyway. Despite its limitations, it is remarkable with what kind of audacity Jackson films his events regardless of how low his budget is, yet he already displayed a sixth sense in ingenuity since several moments reveal that they were truly directed (the legendary sequence where Derek keeps a man hanging from a cliff near the coast, trying to make him admit he is an alien, is not only dazzling for its panorama shot, but also for the fact that both characters are played by Peter Jackson himself - one with a beard, the other without a beard, wearing glasses, indicating meticulous planning and editing), whereas some jokes are just plain deliciously innocent or clever ("We have to protect Earth from the aliens!", says one team member, upon the other just has to add: "And the Moon, too!"; Derek drives a blue van with cutouts from the Beatles in the front seats; upon hearing that Derek fell and died from the cliff, the team members comment with: "Poor Derek... Birds were the only thing he could relate to...", while the camera cuts to seagulls gathering to eat the remains of Derek on the cliff), whereas at least one expressionistic sequence is genius, the one where the house in space is passing by Saturn, proving to be one of the most bizarre forms of alien transportation ever. In numerous other instances, this film wouldn't have worked and may have turned into a disaster, yet it sends a vibe as if Jackson felt he was living in the middle of nowhere, where nothing was happening, and thus decided to make something unbelievable out of a protest against the routine, no matter what form it took, and this spark of rebellion carries the entire film.