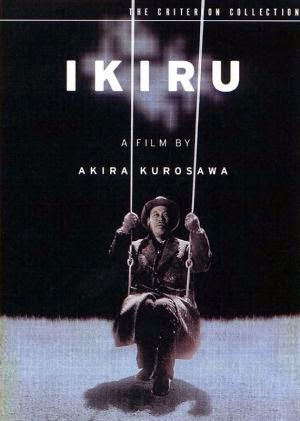 Watanabe, a middle aged Chief of Public Affairs, decides to quit his bureaucratic way of life after the doctors say he has an ulcer, but from talking to another patient, he realizes he actually has stomach cancer and only six months to live. Ever since his wife died, he has been living with his son, but he is only interested in inheriting all his money. Trying to live the remains of his life to the fullest, Watanabe gets drunk, hangs out at night clubs and spends the days in the company with a young woman, his co-worker. However, none of this fulfils him, until he decides to make a park out of an cesspit everyone was complaining about. Despite the opposition, he persuades the Mayor to build the park and dies happily there.

Long before "The Bucket List", "The Doctor", "Knockin' on Heaven's Door" and numerous other films, Akira Kurosawa was practically the first one to establish a subgenre about a man discovering he has only a short time more to live due to a terminal disease, and therefore decides to explore his life. "Ikiru" starts off as a refreshingly unusual story, with an almost metafilm opening: an X-ray of a stomach is the first scene of the film, and the narrators says: "This is the stomach cancer of our protagonist. But he does not know it yet." As the story then swings to the man in question, Watanabe, working mechanically as a bureaucratic civil servant, the narrator explains how he "hasn't been actually living at all. He is practically dead without knowing it". The roundabout way he discovers he has stomach cancer is kind of contrived (the doctor never tells him openly, but another patient based on his own symptoms), and the storyline is sadly formulaic and spasmodic at times (for instance, the son and his wife just happen to talk about having only interest in dad's pension when they walk into their room, just as dad was conveniently there all along), yet the main theme has weight: Watanabe is a person who lived all his time for others, and never for himself, and now wants to find some revelation, pleasure or cause in life, but simply does not know how. He starts out a lot of things, but realizes that's not it. This contemplation gives the film power, and a conclusion that the best way to fulfil it, is to do what you can to leave a positive legacy for others in the world. Unfortunately, "Ikiru" loses its momentum about 100 minutes into the film, and the last 40 minutes are sometimes painfully slow and unexciting, with a rather problematic point - building a park is not as meaningful as Kurosawa would want us to believe (a school or a hospital would have been far better), which leaves a half-hearted taste in the viewers' mouth, almost as if Watanabe wanted to do something big, but could not, and then decided to do something neat instead.