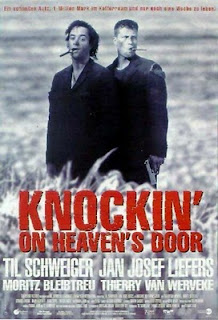 Two unusual sick men meet each other in a hospital: Martin Brest, who has a tumor on his brain, and Rudi Wurlitzer, who has bone cancer. Since they are about to die soon anyway, nothing matters to them anymore. They drink a Tequila and steal a car from two criminals with a million DEM in it, so they are now chased. They only wants one thing: go to the sea and have fun on their journey. They rob employees at a gas station and a bank, getting fancy clothes. They avoid the police through a trick: Rudi pretends that he is a hostage and Martin that he is his kidnapper. They give huge tips on their way whereas Rudi hires two prostitutes in a brothel in the Netherlands. But they get caught by the criminals there and the main mobster shows up. Surprisingly, he heard about them and lets them go. Rudi and Martin arrive at the sea.

This funny road movie isn't an antipathy gangster ballade as the first sight might deceive, but a cheerful adventure with a well hit rhythm. Director Thomas Jahn nicely leads the logical jokes of his two heroes who due to terminal diseases do things they usually wouldn't, but the serious dramatic moments do end up unbalanced. The film was a smash hit in Germany and even managed to persuade the Dutch actor Rutger Hauer to make a small but effective cameo as the gangster in the finale who acts in a way that was probably almost never seen in any kind of movie gangster until 1997. Despite some banal and partial solutions, the story is very sympathetic, Til Schweiger and Jan Josef Liefers delivered nice performances whereas even the criminals, a German and a Turk, ended up rather well conceived, together with the compact running time.
Grade:++
Posted by Marin Mandir at 6:52 PM