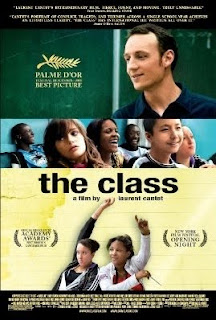 Entre les murs; Drama, France, 2008, D: Laurent Cantet, S: François Bégaudeau, Nassim Amrabt, Laura Baquela, Cherif Bounaïdja Rachedi, Franck Keïta, Esmeralda Ouertani, Rachel Régulier
François Marin is a teacher of French in a high school situated in some down and out suburb. He has a difficult task engaging his class comprised mostly out of problematic students and immigrants from Africa or Asia. Students like Cherif, Juliette and Dalla argue too much, Wei has difficulties articulating his French language whereas the girl Khoumba is so grouchy over an argument that she writes him a letter asking him to leave her alone. The biggest troublemaker is Souleymane from Mali – after one argument, where François called two girls names, he vehemently leaves the class. As a consequence, a commission decides to expel Souleyman from school.

A whole film revolving just around ordinary days in class – not quite a high concept, but the director Laurent Canter said, why not? Considering that there is pretty much a film for almost every genre, situation and experience in human life, the almost documentary drama “The Class” seems like a natural addition to one part of life that is rarely cowered, but is quite essential for almost everyone – education. The authors had a difficult task - how to make such ‘hermetic’ story that only shows the teacher teaching and the students asking questions, interesting? – Yet they achieved an elegant, unassuming and clever little film that surprisingly even won the Golden Palm in Cannes. Combining the ‘shaky’ camera with teenage students who improvised their acting, Laurent crafted a realistic insight into one class, equipped with authentic situations (in one scene, Souleyman wants to ask a question, but says he rather wouldn’t because he might be “deported to Guantanamo”. The teacher tells him to openly ask his question without fear, upon which Souleyman asks: “I have heard rumors…Are you gay?” The whole class bursts into laughter, but the teacher just nonchalantly stares them down and replies with: “No, I’m not. Are you disappointed now?”) that all show how the profession of a teacher is really tough, which is why the movie flows nicely, even though only the episode of Khoumba’s letter to the teacher and the finale with the commission manage to grasp the full intensity and capacity of the concept.