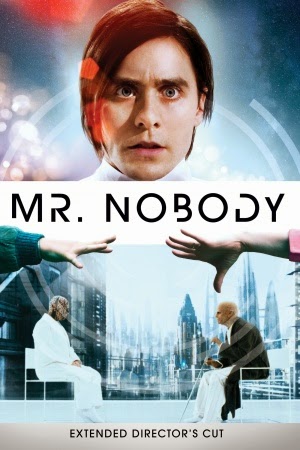 In the year 2092, the 118 year old Nemo Nobody is the oldest man in the world and his upcoming death attracts media attention. He tells his life to a reporter: as a boy, he had a feeling that he remembers his future. When his mother and dad separated, his life separated as well: in one parallel universe, Nemo stayed with his father, had a motorcycle accident and died in a coma. In another parallel universe, he met Elise, but she left him. In another, he managed to persuade her to marry him, but she developed a mental disorder. In his opposite choice, Nemo with his mother and met Anna, but lost contact with her when she left for New York. In another universe, Nemo married Jeanne. Just as Nemo is about to die, the expansion of the universe reaches its end, and starts shrinking, thereby causing the time to go reverse. Nemo is happy because he will now see the girl he loved again, Anna.

Jaco Van Dormael's cult fantasy film "Mr. Nobody", the most expensive Belgian film at that time, polarized the critics: some called it a brilliant experiment, while others called it pretentious and simply unwatchable. The movie indeed opens up with confusing sequences: the main hero, Nemo (Jared Leto) is killed in a space station. Then he is killed when a man shoots him in the bath tub. Then he drowns in a car that falls in a lake. And in a fourth moment, just as he is driving, a gas truck explodes in front of him. As hermetic and 'autistic' as all this seems, its bizarre storyline is actually a straightforward visualization of the parallel universe theory: here, the universe expands and then collapses in itself, again and again, and each time, Nemo is brought back in this universe, but has a chance to explore his life and take a different path. This also explains why he has 'deja vus' as a child, because all of this already happened. In one parallel universe, Nemo thus marries Jeanne, in another he marries Elise, while in the third, he still longs for his teenage love Anna. And figuring out which one of these (six?) lives is the 'right one' is one of the main themes of the film, even though each option has its bitter disappointments and no life is perfect, which is summed up by the 118-year old Nemo: "Each of these lives is the right one. Each path is the right path! Everything could have been anything else, and it would have just as much meaning!"

Van Dormael actually has quite a rich movie language: in one scene, as the camera circles around the room, little Nemo is seen in his bed, while the conventional music for the song "Mr. Sandman" is heard, yet all of a sudden, the music changes into a "rebellious" tone, into a rock n' roll tune, while the camera pans back to the bed, revealing now a teenage Nemo. In another clever scene, just as Nemo ends the shooting of his science show, he asks for another take, yet a girl from the crew tells him, ironically, that you "don't get two or three takes in life". Also worth mentioning is the visualization of Nemo and Anna meeting in a station and hugging, while the people around them are walking in fast forward speed - all of which is filmed with the camera circling around them! However, as clever and inventive all this is, Howitt's much simpler "Sliding Doors" was better because it focused on only two life options and had genuine emotions, while here the movie is indeed overburdened because Van Dormael crammed the storyline with too much excess, until "Mr. Nobody" becomes exhausted from itself, and this aggravates the access of the audience to the already hermetic film. As chaotic the film is at the beginning, so much it is harmonious at the end: it truly has a point that is gold and is worth seeing, because it reaches cosmic proportions through the small destiny.