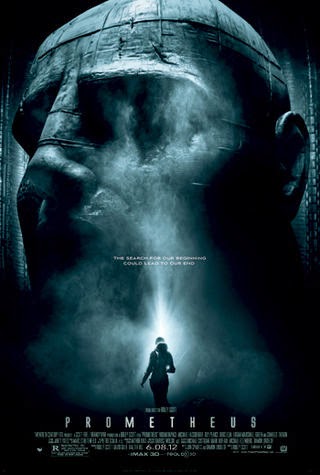 In 2089, archaeologists Elizabth Shaw and Charlie Holloway discover an ancient painting of a map in a Scottish cave, made tens of thousands of years ago. Using several ancients maps, they discover that they point to the same solar system, and send a spaceship, Prometheus, there to investigate it, sensing humans might have been created by aliens. Once on the moon with atmosphere, they discover a cave with artifacts from an alien civilization. Android David wants to test the fluid in it and puts it in the drink of Holloway who is infected by an unknown disease and dies. Elizabeth, who had sex with him, finds out an alien parasite is growing inside her, and uses a robot operation to remove it. One humanoid alien is found alive, but he kills the film crew, until Elizabeth kills him. Stranded on the moon, she uses David to escape to find the home world of the aliens.

Ridley Scott's "Prometheus" is a science-fiction film in the vein of the 'Ancient Astronauts' theory, but suffers from too many cliches that are bellow the golden standard of the classic of that subgenre, Kubrick's "2001: A Space Odyssey" - even the curious behavior of the humanoid android David (very good Michael Fassbender) is just a restructuring of HAL 9000's malfunction - while it overall only has one truly original take on it, namely that human ancestors, the aliens, are actually worse than humans and thus nullify the protagonists' expectations of finding an universal ideal. The first half of the film works the best thanks to an effective narrative that tickles the viewer's curiosity when the astronauts are exploring an alien world and find artefacts of a local base (a good sequence involving holographic depictions of the humanoid aliens walking through the corridor, resmebling almost like recordings of old VHS tapes in 3D, with the astronauts just standing by and observing the recording), but the second half starts falling apart fast, because too many plot points lead nowhere and are left more incomplete and vague, not subtle and thought provocative as it may have been intended. Likewise, this second half is not as bad as much as it is taking too much already seen scare tactics from Scott's classic "Alien". Some moments are also illogical (when Holloway is infected by the alien disease and pleads to get killed to be saved from agony, he is torched to death (!), which is nonsense: a quick shot in the head would have been much faster than a slow, heavy-handed heat death). Among the plus points are an effective horror sequence involving a surgery and a subtle hint that the alien base may have been deserted because it was a military base where a biological weapon went out of control, yet "Promatheus" could have still been a beter film.