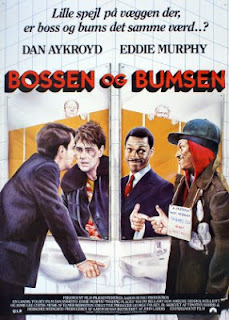 New York. Two millionaires, Randolph and Mortimer Duke, make a bet as to what is crucial in life and destiny of an individual: wealth-environment or just character? In that respect, they make their wealthy and cultured employee Louis poor and a certain homeless, vulgar Billy rich. After a certain time, their characters change entirely: Billy starts to become more sophisticated while Louis becomes aggressive and criminal, getting only saved thanks to a kind prostitute, Ophelia. However, when Billy finds out about the bet, he teams up with Louis and they conjure up a scheme in the trading commodities market involving orange juice, managing to make the Dukes poor.

Once an excellent comedy, "Trading Places" is today a less impressive achievement since time corroded a part of its freshness. The jokes exhaust themselves in the second half when the movie starts to become an empty ode to revenge, the dramatic elements were not that subtly integrated into the storyline whereas some jokes are indeed too crude and vulgar, like the infamous gorilla costume sequence. However, even though its execution is 'rough', the sole concept, loosely based on Mark Twain's "The Prince and the Pauper", is fascinatingly revealing and wise, showing a philosophical analysis of society and the nurture vs. nature argument, i.e. are "savage" people "savage" just because they have adapted themselves to the "savage" environment, and would theoretically be "classy" if they were living in a wealthy environment, or are they like that biologically. The satirical jabs aimed at capitalism are surprisingly brave, since the story shows the middle and lower class teaming up against the upper class, the bourgeois Dukes, played by brilliant Don Ameche and Ralph Bellamy who are cast perfectly, yet every other role was also wonderfully cast, from Jamie Lee Curtis in the role of a kind prostitute, for which she won a BAFTA, up to the top-notch Eddie Murphy, who was even nominated for a Golden Globe. The finale in the commodities trading market is two notches more intelligent than your average 'revenge flick', and was so stimulating that several websites dedicated in-depth analysis of it whereas it was even the inspiration for a new regulation of the financial market 17 years later.