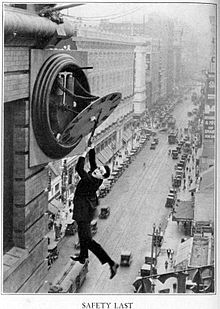 Harold leaves his girlfriend and small town for a while to find a good job in a big city. However, the urban life is tougher than expected so he sends exaggerated letters to her about his business success, while hoping to find a real job eventually. He finds a position of a clerk in a department store and pretends he is the general manager when his girlfriend visits him. In order to win a 1.000 $ promised for a publicity stunt that will attract a large crowd to the store, Harold persuades his friend to climb a 12-story building. But when the friend is chased by a police officer, Harold climbs it up all by himself.

With the flow of time, it seems the mainstream historians decided to remember only one film for each prolific comedian from the early cinema, whether it is Keaton ("The General") or the Marx brothers ("Duck Soup"), and of similar fate was the often neglected, but brilliant Harold Lloyd, whose "Safety Last" is his only comedy frequently mentioned in film lexicons. "Safety Last" is even by today's standards an excellent comedy, wonderfully simple and sincere as well as full of good-natured spirit often found in those 'good old school' storylines, that seizes attention thanks to its great, fresh jokes (Harold and his friend "disguising" themselves as two hanging coats, hiding their legs under them so that the landlord will not find them in the apartment; Harold combing his hair in the reflection of a man's bald head) which would seem even fresher if modern comedies would not copy them, and often meticulously choreographed stunts. Some situations and ideas may seem forced at times, yet not to such a degree that it would take a toll on the whole film. The final 20 minute sequence where Lloyd is climbing up a 12-story building gained the most attention, not only in the film but with the critics, too, with the scene of him hanging from a half-tipped clock turning into one of the icons of cinema that was often cited in other films (Doc Brown's stunt finale in "Back to the Future", for instance), even though the scene where a pigeon is "disrupting" him while eating seeds on his shoulders is even funnier, all contributing to a simple classic.