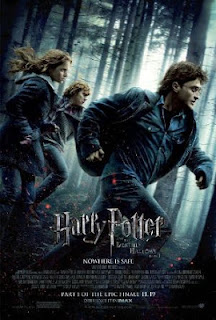 Lord Voldemort wants to kill Harry Potter, but since their two magic wands are "twins", he could theoretically only hurt him. Since Harry is not safe anymore, he and his friends Ron and Hermine are hidden in an isolated cottage on the countryside. The three then disguise, enter the Ministry of Magic, obtain the Hocrux and flee into a forest. They find out that Voldemort wants to find the three Deathly Hallows: a wand, a stone and cloak of invisibility. They are abducted and taken to Malfoy's premises, but manage to flee.

In the long list of the overrated, overhyped and overblown Harry Potter film series, the 7th film and the penultimate contribution to the franchise, "Deathly Hallows - Part 1" is surprisingly well done, a concise and straight-forward fantasy quest flick, better than the previous movies that already started to get irritating with their cliche repertoire (cheap "boo" scares; the constant grey-dark cinematography after which one yearns to watch a film with normal colors; unnecessary dark moments used just to keep the viewers' attention...). Some of those cliches can be found even in this film, but luckily in far lesser amount, since director Yates and screenwriter Steve Kloves did a good job in the 'raw' storyline: in this edition, the story took a dramatic 'Trotsky turn' since Harry is constantly fleeing and hiding on the countryside, fearing he might be assassinated by Voldemort any moment, which circled out some more mature moments - mature as the tension between the Harry-Ron-Hermine love triangle, and not those wannabe "mature" scenes that are just darkly lit dramatic rubbish. The sneak infiltration into the Ministry of Magic, where the three protagonists are disguised, is wonderfully done, the chase through the forest is effective-suspenseful, yet "Hollows - Part 1" still suffer from some obvious flaws, from the overlong running time up to the too complicated story that is all over the place with too many subplots. A surprisingly concise sequel that allowed the story to grow together with their teenage protagonists.