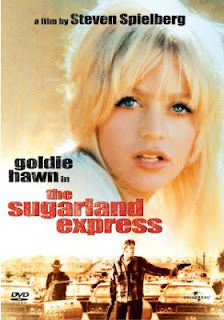 Texas. The unemployed cosmetician Lou Jean travels to a secluded prison to visit her husband Clovis Michael and persuade him to break out four months before his release, in order to get back their baby which was given to foster parents. When a police officer, Maxwell, just wants to warn the people who were driving too slow on a highway, Lou Jean and Clovis panic and kidnap him. Traveling in his police car, they attract the attention of the media and other police officers. In the end, just when Clovis wanted to take his baby back, he and Lou Jean were shot in an ambush.

From today's perspective, it is safe to say that "Sugarland Express" is not among Spielberg's best achievements, yet he still showed to have more spark and style than many would admit. Based on a true story about an insane decision of a young couple kidnapping a police officer to drive to the city where their baby is living with foster parents, "Express" is obviously a road movie, except that between the sole tangle where the clumsy couple kidnaps the police officer and the finale there is not much of a stratification of events or interesting moments, which makes it seem slightly grey at times. Spielberg still managed to craft a few clever scenes (the image of Wile E. Coyote falling from a cliff in a cartoon reflected on the glass while Clovis has a worried, troublesome expression on his face, which is a subtle foreshadowing) whereas Goldie Hawn and William Atherton are well cast as the well meaning, but sloppy couple, while some even saw a subversive message in the story aimed at showing how the law separates a family and thus makes them turn into outlaws just to get back together. It won the best screenplay award at the Cannes film festival.